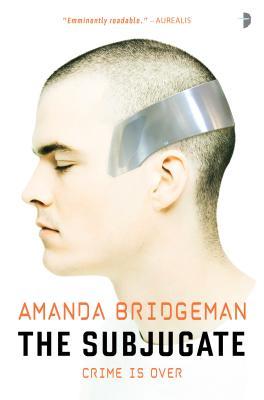 In a very religious, rural community – a train ride from the nearest metropolis – a brutal rape/murder has occurred. This is shocking to the pious locals as everyone is devout or in training to become a true believer.  Sent to investigate the murder are a pair of detectives from the city, Salvi Brentt and Mitch Grenville, both with haunting pasts that neither wishes to discuss.

Brent and Grenville discover that this small community is filled with possible, even likely suspects as The Children of Christ church community operates the Solme Complex. The Solme Complex is a rehabilitation center for some of the worst, most hardened criminals who are put through a rigorous process (and maybe a few beatings) to become docile Believers.  They begin their journey as Subjugates and move to become Serenes.  In addition to their rehabilitation, the Subjugates and Serenes provide labor to the community, and that’s become attractive to some city dwellers who decide that a peaceful community with free labor, is a nice change from the busy city.

Complicating the investigation is that the Solme Complex insists that their Subjugates and Serenes couldn’t possibly have committed a crime, because of the thoroughness of their rehabilitation, but they also won’t let Salvi or Mitch conduct any interviews without tremendous oversight and conditions.

The crimes and bodies add up in the small town, and loner Grenville shows some unusual behavior, such that Salvi isn’t sure what she should do about her own partner.  Could he be trusted?  Could he have committed the crimes?

I’ve never read anything by Amanda Bridgeman before this, but I found this mystery really engaging.  There’s the clear ‘whodunnit’ mystery, but there’s the personal mysteries Salvi’s past (why does she seem so affected by the Children of Christ Church) and Mitch’s(his girlfriend was killed and he was a suspect for a time).

The characters (mostly) stand out, unique from one another.  I did have some trouble identifying the different Subjugates and Serenes (they are identified by numbers), but some of that may be by design as they are in essence each reduced to nothing to be built back up in Christ.

This was a smooth read, and a page-turner.  It was easy to get caught up in this story and it built, bit by bit, with a few red herrings and possible suspects along the way.

While there are some science fiction aspects to this novel, there really don’t have to be. This is first and foremost, a detective mystery story and the science fiction parts are negligible. It doesn’t take away from what works really well, but it could be disappointing if you are looking for a science fiction story.

This is definitely worth reading and I look forward to the next book in the Salvi Brentt mystery series.

Looking for a good book?  If you enjoy a good mystery, with characters who are flawed, and a touch of science fiction thrown in, then pick up Admanda Bridgeman’s The Subjugate.