THE FALL OF IO – Wesley Chu 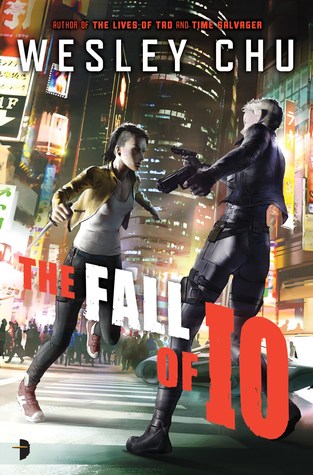 Ella Patel is a street-smart con artist who has survived by avoiding complications wherever possible. Unfortunately (or perhaps fortunately) Ella became host to Io, a Quasing alien. Io is able to offer advice and suggestions to his host (which is a little unnerving, of course), but Io isn’t exactly the brightest Quasing on the block. Combine that with Ella’s stubborn independence and there’s a constant battle brewing in Ella’s head.

If that were the only battle Ella had to deal with, she might manage.  Unfortunately, there’s a Quasing war on between the Prophus and the Genjix and because of Io, Ella is dragged into it. The Prophus want to train Ella as an agent, but she’s a little too independent for that.  That should be the end of it, sending Ella back to petty street crime, but the Genjix want to contact their home world and to do so, they need information that Io has.  And Io is still in Ella’s head.

It’s been a few years since I read the first ‘Io’ book – which I really enjoyed – and it was fun getting to meet these characters once again.  Ella is a pretty stereotyped dystopian heroine – young, on her own, street smart and savvy and full of cranky angst and suddenly burdened with some responsibility and wanted by some not very nice people.  Even so, Chu manages to make her unique and you don’t feel like you’re reading a stereotyped character.

A big part of the fun of this book (as with the previous) is the relationship between host and parasite and we have plenty of that.  The story is quite secondary here.  There is a story, and it could be a pretty major issue (war is a pretty big issue) but it never feels as important as the relationship between Io and Ella, and that does bring the enjoyment down just a notch.  It’s a fun book, but it lacks some bite.

Looking for a good book? The Fall of Io by Wesley Chu is a fun action/adventure teen fantasy but substitutes detailed action for a riveting story.

The Fall of Io