Posted by Daniel on April 28, 2021
Posted in: OTHER, Uncategorized. Tagged: 4 stars, ChickLit, Literature. Leave a comment 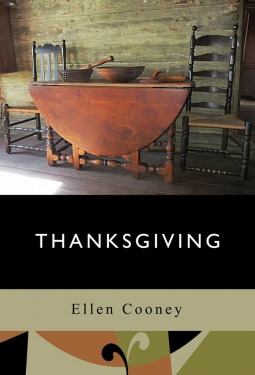 Ellen Cooney’s Thanksgiving follows one family through 350 years of Thanksgiving preparations. One family, one house, one room, one meal. Cooney’s book connects generations, shares family joys and sorrows and as family items and heirlooms are handed down and sometimes lost, reminds us what is important in life.

I have to admit that the first time I started to read this (back in 2013) I was bored early and put it away to try again.  I’m glad I waited and tried again because this time, perhaps fueled by my own interest in family history and genealogy, I was more interested in making the connections and following the family.
Seeing how little humans change over the centuries is fascinating. Our technology changes, and perhaps our perception of how we fit into the world changes, but at our core we, as humans, have many of the same concerns, loves, fears, and fervor now as we did 350 years ago.
Cooney manages to give us a little bit of the historical backdrop to each chapter (which features a new generation in the family line) as well as something that has a family member concerned.
One of my problems eight years ago when I tried reading this is that I was that I was not realizing that we were not going to be seeing the same people from chapter to chapter  – that this was not a book about a person, but a book about a family tree. It’s definitely a different sort of read than what I am typically used to.  This is ‘big picture – compare and contract with lots of glimpses at many individual stories’ rather than the more typical ‘one story with maybe a couple of subplots pulled together by one or two individuals.’
I liked that each chapter was titled for an item on the Thanksgiving table which helps pull together the metaphor of family gathering around the holiday table – even though the family is separated by time.
This is clever, tender, and well written, but ultimately it is a book that pulls together an idea and not a story, which is maybe why I was left just a little unsatisfied as I finished. Still, I give it four stars because I liked the message and the way it was done.
Looking for a good book? Thanksgiving, by Ellen Cooney, is a book about family and history and the coming together, using the American Thanksgiving meal as the common event between the generations.

Posted by Daniel on January 13, 2021
Posted in: OTHER, Uncategorized. Tagged: 4 stars, ChickLit. Leave a comment
Nikki Daniels is a single mother of a teenage boy, Cody. She owns her own business (home appraisal) and she’s got a younger boyfriend (Jake) with whom she’s hoping to start a new business. It’s an ideal life, right?  Except it’s not as ideal as it might appear on the surface.
Nikki wants to be in real estate and not home appraisal or the restaurant business that she’s starting with Jake. Cody is a teenager and has no interest in what Nikki says. Jake is often emotionally distant and Nikki wonders if he’s just using her to to finance his dream. But worst of all, her father, Ronnie, has been released from prison and he’s coming to live with Nikki

Ronnie, a charming con man, has been estranged from his family since his sentencing, but his early release from the correctional facility (due to a  technicality) has him nearly slipping into his past behavior (especially conning women to bed) and he feels the best thing for him is to move in with his daughter and grandson.

Nikki doesn’t Ronnie around, afraid, in part, that he’ll be a bad influence on Cody, but Ronnie uses his con charm to integrate himself deeper and deeper into Nikki and Cody’s lives.  Ronnie recognizes Jake’s con and helps Nikki shake him loose, and Nikki can’t help but see the positive change in Cody now that his grandfather is giving him some attention.

I don’t remember what it was about this book that had me interested in reading it, and I had no idea what to expect as I got into it. I was expecting something dramatic to happen, which was never really there. About half way through I thought, “Okay, we’ve established the characters and the plot, when is the dramatic moment going to happen?”

But this isn’t that kind of book.  This is a gentle story about one woman turning her life around and making new connections with the men in her life.

This is what readers often refer to as ‘chick lit’ – a term I don’t care for, but when I looked it up on Wikipedia I found:

Chick lit … is genre fiction, which “consists of heroine-centered narratives that focus on the trials and tribulations of their individual protagonists”. The genre often addresses issues of modern womanhood – from romantic relationships to female friendships to matters in the workplace – in humorous and lighthearted ways.

At the point where I was waiting for something more dramatic, I was already quite invested in the book because author Tracy McMillan delivers really well defined characters.  Nikki is the appropriately strong protagonist.  She is strong, though she needs the nudges she gets to shake her up a little bit to remind her not to settle.  She goes through the most significant character arc through the course of the book, opening herself up to what Ronnie brings to her (and Cody’s) life.

Although Ronnie plays a significant role in the book (every other chapter being from his point of view), he is more of a stereotype, not quite so well defined, and he doesn’t grow or change nearly as much as Nikki. His role is simply to provide the impetus for all the changes that Nikki will need to navigate.  Given this role, and the more stereotype-ness of his character, I think Ronnie’s carrying half the book was just too much.

But this was still an enjoyable, feel-good book that’s easy to read.

Looking for a good book? If you like chick lit and need a good quarantine read, consider Multiple Listings by Tracy McMillan