The literary equivalent to the Hollywood ‘B’ movie would probably be the pulps, or ‘pulp fiction.’ We don’t see a lot of pulp fiction today, but I’d say that author Dan Hanks is still writing in the pulp fiction style.

In Swashbucklers, our hero is Cisco Collins.  And ‘hero’ is the correct term.  As a child, Cisco was one of a few people who saved the world by defeating a pirate known as Deadman’s Grin. Grin had been able to animate inanimate objects and turn them into killing machines.

Now a down-on-his-luck adult (his wife has left him for her fitness instructor), Cisco returns to his hometown (with his son George). He’s first stunned that no one seems to remember the world-saving battle – not even his old friends with whom he fought! Cisco  works to help his friends remember what they once went through.

The other thing that Cisco notes is that there are some inanimate objects are coming to life and attacking the town.  Is it possible that Deadman’s Grin was not truly defeated? It becomes urgent for Cisco to get his friends to remember how they defeated Deadman’s Grin the first time so that they have a frame of reference for their inevitable next battle.

Hanks delivers a classic pulp adventure story in the vein of Green Lama and Domino Lady and Captain Hazard.  If these aren’t familiar pulp hero names to you, that’s kind of my point. While the pulps may have brought us Conan and Tarzan and Doc Savage and the Green Hornet (characters many readers are familiar with), they also saw a lot of characters who’ve been forgotten over time. … Because the stories and characters generally aren’t worth remembering except by those ardent pulp  fans who reminisce about the glory days of pulps in online chat rooms (um…yes, I do lurk in some of those).

Hanks infuses the story with a big sense of history (an attitude of: ‘we did all this other stuff … remember when we did this…remember?!’). It’s quite strong and at times I felt maybe I should put the book down and go read that first book in the series.  Except, oh wait, there is no other book in the series.  But … I’m a little more interested in that story because in this one, our hero spends a good deal of time complaining about getting old and how much harder it is to fight a villain now and frankly I found it not funny (as I assume it was meant to be) and more than just a little bit whiny.

This is my second Dan Hanks novel and it seems pretty clear that he likes that low-budget, pulpy, B-movie feel which is pretty specific, and it’s the sort of story I actually seek out in used books stores while bemoaning – “why doesn’t anyone write campy stuff like this any more?” So I should really like this, but it just never engages.

Looking for a good book? If cheap pulp adventure is your reading interest, you might enjoy Dan Hanks’ Swashbucklers.

ANARCHY OF THE MICE – Jeff Bond

Molly McGill is a twice-divorced single mother with a struggling P.I. business. She’s struggling to hold her life (and her kids’ lives) together and seeing her teenage son wearing a t-shirt that supports the “Blind Mice” – a group of anarchists who have been disrupting government functions and have been in the news frequently – puts her on edge. Everything seems to be falling apart around her when she gets a visit from Quaid Rafferty, a former (now disgraced) Massachusetts governor and his partner Durwood Oak Jones.  They have a job for Molly … infiltrate the Blind Mice.

They establish Molly as an outspoken blogger opposing government interference and Molly finds it surprisingly easy to write her vehement blog posts. Her blog posts get her noticed and she’s soon invited to do some radio talk shows, and up the ladder to television, and then she’s finally invited to become a more ‘official’ member of Blind Mice.

What Molly didn’t foresee was the life-threatening dangers involved with associating with this highly organized group.

I’ll admit that one of the main reasons I requested to read this book was the very pulp-like cover. I’ve been in a mood to read more classic pulp fiction and I’ve been searching for some modern day pulp that harkens back to the pulps of the 50’s and 60’s.  This awesome cover brings precisely that to mind. The writing, unfortunately, does not.

The biggest downfall here is the amount of time we spend setting up the story. It feels like it takes such a long time to establish our main character, then build up her cover story before we get to any actual pulp-like action.

Once we get to the action we have another problem – believability.  We spend a great deal of time with Molly, Quaid, and Durwood and there is a small cast of supporting characters who aren’t as well established and we are forced to simply believe in their capabilities. One, in particular, made me roll my eyes when she (who has absolutely zero skills with computers) goes undercover as a tech genius and bluffs her way past the highly skilled employees. This kind of suspension of disbelief is okay with complete buy-in to the story, but because of the length of the set-up, establishing a quite believable premise, asking the reading to go back and forth (‘believable, suspend your belief, believable’ etc) makes this hard to really get in to.

I liked the general character of Molly and I’d be curious to read more of her adventures, but this lengthy adventure isn’t strong enough to get me to read any more.

Looking for a good book? Anarchy of the Mice by Jeff Bond appears to be an attempt to bring back the adventure of classic pulp fiction, but where the pulps are fast and furious, this is slow and methodical and a bit of a challenge.

Anarchy of the Mice 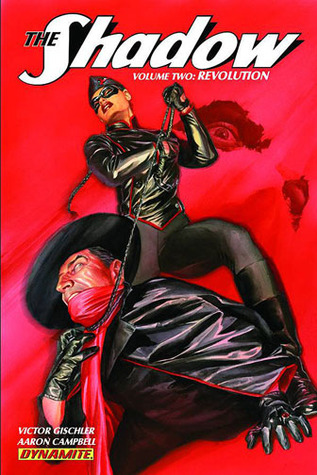 Since discovering The Shadow through cassette tapes back in the ’70’s, I’ve considered myself a moderate Shadow fan.  I bought some of the old pulps to read more, and really enjoyed that dark, but positive atmosphere of this do-gooder. The art in this graphic novel captures the tone of those old Shadow stories quite well.

This book is mostly set in the 1930s, during the Spanish Civil War.  Lamont Cranston (aka The Shadow) poses as a potential funder of arms to the various powers-that-be, but The Shadow has plans to infiltrate and dispose justice.

It’s an interesting story, and author Victor Gischler does a nice job of keeping some mystery about this man.  But not enough…!  I recognize that there is sometimes a need or desire to, shall we say, ‘humanize,’ or at least keep human, a figure with special powers (The Shadow has mystic powers that allows him to cloud men’s mind, and to see in to their hearts).  But when every masked, hooded, or in some way cloaked figure gets ‘outed’ so easily by a dame, it cheapens, more than humanizes, the hero.

I also happen to have a personal dislike for a particular modern colloquialism … but when I read a story, set in the ’30’s, and a character, after accidently bumping in to another character says, “My bad,” I cringe, shake my head, and am completely removed from the setting and mood that was established.  There’s just no reason for this.

But these are relatively minor points to what is otherwise and engaging, solid set of stories in this book, mostly faithful to the mood of the early pulps and radio stories.

The art by Aaron Campbell, Jr. and Jackson Herbert is solid and fitting to the era and the story.

I really enjoyed this, surprising myself a little by liking it as much as I did (though I don’t know why I should have been surprised), and will likely pick up another issue at some point.

Looking for a good book?  This graphic novel of a pulp-era hero is right on target and will bring back memories for those already familiar with The Shadow.