HEIR TO THE JEDI – Kevin Hearne

Heir to the Jedi is part of the “new canon” for the Star Wars universe, meaning that whatever you read here is now and forever (or until they change their minds) officially part of the grand Star Wars story.  I’m not sure why there needs to be an ‘official’ declaration of this other than that a few savvy readers would otherwise question (at conventions and online) each adventure and wonder “Did Luke really do that?” (as if Luke Skywalker were real and some adventures are true, and others not).

For myself, I just like a good story, and if contains characters with whom I am already familiar, then I typically find it very comforting.

This story, by Kevin Hearne, features Luke Skywalker and R2D2 (and not much of the other main characters from the movies), and takes place shortly after A New Hope.  Luke is not yet a Jedi, but still a moisture farm boy who is just beginning to experience a taste of the greater galaxy.  Hearne does a good job of reminding the reader of this throughout, with Luke trying to use the Force with very little success periodically.

The story is that Luke is sent on a mission for the Rebel Alliance.  He is rescue a brilliant cryptographer who is trying to defect from the Empire.  She is not a hostage, but she is being monitored due to her uncanny abilities to decode even the most advanced codes and communications systems.  But getting in and out of Empire territory will challenge Luke and he’ll need more than a fast ship to pilot.

For the most part, Luke travels a lot, hopping from planet to planet and I’m not sure why this was important.  I found no reason for it.  The plot is very straight forward and basic.  Rescue the brilliant cryptographer.  There is a new character introduced into the canon — Nakari Kelen — to help him along the way.

If you’re looking for a deep story with exciting subplots, this isn’t the book for you.  The plot is just what I’ve mentioned above.

Hearne does a fine job capturing the essence of the Mark Hamil Luke Skywalker, though there is perhaps just a tad too much made of his not being a Jedi yet.  There are also moments when he’s downright dumb, rather than innocent.  For instance…he’s on a secret mission to pick up someone who is being kept hidden and when he asks to see Taneetch Soonta, his target, he is met resistance and the insistence that no such person is there.  He finally manages to get across to the person that he’s there on her behalf and we get this exchange:

“That changes things. Welcome back to Rodia, Master Skywalker. If you would please follow me, I’ll take you to Taneetch Soonta.”
“What? You said there was no such person.”
“And now I’m saying I’ll take you to her. Try to keep up.”
“Who are you?”

Why would he ever say “What? You said there was no such person.”?  Did he suddenly forget that this was supposed to be a secret?

There are also a few moments in the book that strike me as ‘off’ considering that this takes place after “Episode IV: A New Hope.”  At one point, Luke reminisces:

Flirting on a mission is one of the best ways to ensure mission failure—and most likely romantic failure. I’d seen Han Solo get in trouble too many times while he was trying to charm Leia to doubt it, and he hadn’t exactly won her good graces yet.

When, exactly, did Luke see Han trying to charm Leia … too many times?

I found Hearne’s choice of perspective an interesting one.  This book is written in first person, from Luke’s point of view – which explains part of the reason there isn’t any subplot … we can’t visit any other players unless Luke is there.  Typically these sorts of books are written in third person, and I found the POV refreshing, even if it did narrow down the scope of what could be told.

I don’t care if this is ‘officially’ part of the Star Wars mythos story or not.  I found it to be a generally interesting read, though it won’t have a lot of lasting value.

Looking for a good book?  Heir to the Jedi, by Kevin Hearne is a quick story of a Luke Skywalker adventure that takes place between the events of Star Wars movies, Episodes IV and V, and is a fine enough story but lacks any new information relevant to the movie history.

Heir to the Jedi 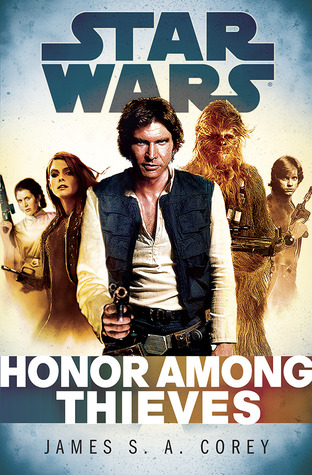 I haven’t read a Star Wars novel since…well, probably since Brian Daley wrote a couple of Han Solo books in the late 1970’s. And it’s not that I don’t enjoy Star Wars (I’m nerd enough to say that I own the top-of-the-line LaserDiscs of the original cut of the original film), it’s just that I never found much interest in reading new adventures of our favorite silver screen sci-fi stars. So what, then, drew me to this book? James S. A. Corey.

James S. A. Corey (it seems to be fairly common knowledge that Corey is actually the pen name for the collaborations of Daniel Abraham and Ty Franck) is the author of a rocking, fantastic modern pulp space opera called Leviathan Wakes (which was my pick for the 2013 Hugo Awards).  I was impressed enough with Leviathan Wakes, that I’ve picked up everything I could find by Corey.  And now…a Star Wars book by this author!

The story takes place after the destruction of the Death Star in Star Wars IV: A New Hope, so the recurring characters and the events are all familiar with anyone with a rudimentary knowledge of the films.  This book (the second in a series) focusses on Han Solo, attempting to part ways but being drawn back in to doing some additional work for the Rebellion.  Han teams up with a new character to the Star Wars world: Scarlet Hark, a female version of Han, with a job.  Han and Scarlet have to intercept a small-time thief who’s managed to steal a map to what could be the most powerful weapon in the galaxies.  Of course the Empire is also tracking that map.  Han and Scarlet have to work together, avoid the Empire, and maneuver amongst thieves and smugglers to protect Leia, the Rebel Alliance, and themselves.

I was immediately struck by how ‘authentic’ the dialog felt.  It was easy to picture Han Solo, Leia Organa, and Luke Skywalker saying their words.  Their attitudes, their inflections (as described with facial reactions and dialog italics), felt true to the characters.  The story delves a little more in to how Solo feels about the rebellion and his part in it.  This, too, just has the right touch to it (or so I imagine).  He’s still a loveable curmudgeon, but getting in to his psyche actually helps explain some of his transition through the following films.

The humor and banter that the film fans love about Han Solo is still present.  James S. A. Corey find perfect moments and means to keep that humor alive:

“I’m not looking,” Scarlet said in a teasing singsong.
“I’m not embarrassed,” Han said to the back of her head. “I am a very good-looking man.”
“Indeed you are, sir,” the droid replied.

Author Corey keeps the action moving at a rapid clip, without sacrificing story, and Corey has a tremendous ability to succinctly describe something that immediately is identifiable to the reader without having to spend pages and pages of needless description.  Take for example:

They were an ugly bunch: middle-aged men who should have been back home on a planet somewhere spending too much time at the neighborhood bar and weedy boys still looking forward to their first wispy mustaches.

Too many authors would have gone on to try to explain what roasted peppers smelled like.  Corey respects the reader and trusts us to fill in any blanks.

As the story moved along, I couldn’t help but wonder what author Corey had created and how it was going to be explained – or, rather, how the absence of the pivotal weapon was going to be explained.  But Corey manages to wrap up the climax in true Han Solo fashion, which was also completely in keeping with what Han was thinking and talking about throughout the book (note: I’m trying very hard not to give anything away!).

This book is precisely what new stories of existing characters should be like!  A continuation.  An extension of the original, and not merely any old story that happens to have those characters.  The inclusion of new characters was fine, but I do feel that Scarlet Hark’s presence and contribution was strong enough that I might wonder where she is when I next watch Star Wars V: The Empire Strikes Back.

This book was actually exciting enough, that now I’m curious to read the first and next book in the series.  Too bad they aren’t written by James S.A. Corey as well.

Looking for a good book?  This continuation of the Star Wars saga is a thrilling adventure that feels so ‘right’ you’ll think there already was the film version.