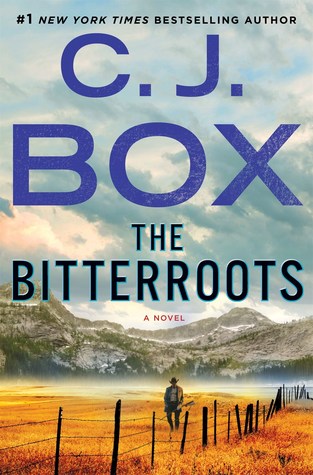 I had not read any C. J. Box books before going into this, but a librarian friend recommended Box based on my enjoyment of the Longmire novels by Craig Johnson. And I’m glad she did.

The Bitterroots is either the fourth book in the Cassie Dewell series or the fifth book in the Highway Quartet series … or both.  I can’t quite figure out what Goodreads is trying to tell me. However, it was somewhat apparent through the course of the book that private investigator Cassie Dewell had a history – that she’d previously been involved in other cases that readers had access to.  Sometimes this was pretty strong as we’re led to believe that at least one of these cases might be coming back to haunt her. But despite this, author Box does a great job of providing us with a story that is solid and complete with these hints of previous stories.

Cassie Dewell is a former cop turned P.I. As a single parent, she is also trying to find a way to spend more time with her teenage son when an old friend contacts her and asks for a favor.  The friend, Rachel Mitchell, is a defense attorney with Mitchell-Estrella law firm. Rachel’s latest client is Blake Kleinsasser who’s been accused of molesting and sexually assaulting the fifteen-year-old daughter of his younger brother. As a former police office, Cassie doesn’t like defense attorneys too much and the evidence against Kleinsasser is overwhelming and Cassie just wants the pedophile put away.  Mitchell convinces Cassie that if Cassie can verify all the evidence then Kleinsasser will be urged to take a plea deal instead of defending his claims of innocence.

Early on Cassie is warned that the Kleinsasser family is highly dysfunctional and control nearly all of the town. She also learns that Blake, the eldest son who stood to inherit the most, was disowned by the family when he left for the East Coast to make his own fortune.  That the family isn’t happy about his return visit would be putting it mildly. That they don’t trust his reappearance would be closer to the truth.

Even though Cassie is looking to confirm the evidence and allegations in order to put Blake away for the rest of his life, her investigation appears to rattle some of the locals and soon she is a target for the Kleinsasser-controlled police and some unidentified attackers.  Against her own instincts and wishes, Cassie begins to feel that Blake may have been set up.

I love the character of Cassie.  She’s knowledgeable and strong but also a worried parent, trying to balance of life with her dangerous career and looking after a teen boy (that alone can be a challenge!).  Character can really make a difference in a mystery like this and Cassie is one of the better ones I’ve come across!

The supporting characters mostly stand out, unique (I had some trouble remembering which Kleinsasser’s were which) and came across as real people and not just stock characters for a book.

The story moves along swiftly with the mystery unfolding at just the right speed to keep the reader interested and in the know.  There’s plenty of action and danger and there are some twists and turns along the way, which is always fun in a book of this sort.

There was one moment of the investigation that changed things for Cassie late in the story, which was suggested or hinted at early on.  But the suggestion (and bit of evidence) was obvious enough for me, even then, to want to pursue that line of research.  I felt that someone with Cassie’s abilities would have, or should have, jumped onto that line of investigation. But of course, if she had, the book would have been over much sooner.  Still, it did detract just enough for me

Overall, I really enjoyed this and would look forward to another C. J. Box book.

Looking for a good book? The Bitterroots by C. J. Box is a delightful Cassie Dewell mystery that is quick to read, with a strong central character, and a mostly well-developed mystery.