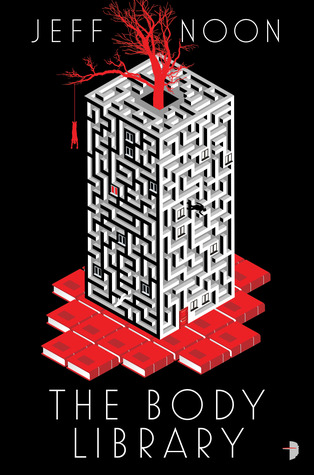 First we had Franz Kafka, writing early in the 20th century, then we had Philip K. Dick and Harlan Ellison some fifty years later keeping readers on edge and on their toes with fiction that shattered our perception of reality.  And now we have Jeff Noon.

John Nyquist has a mystery to solve.  He wakes up in a room to find a dead body near him. But finding the killer might be the easiest part of navigating in the city where everything is just part of a larger story.  Literally.  And I mean, literally.

I had been impressed with the first book in the series, A Man of Shadows, and looked forward to this volume, but I couldn’t come close to imagining how deeply inventive this was going to get.  I knew, though, that I was in for a wild ride as I read the last paragraphs of the opening chapter:

“They’re moving,” she said. “The words are crawling on his skin.”
Marcus didn’t believe her at first; he thought she must be mistaken. But he knelt down at Andrea’s side and saw the truth, and he felt sick. Neither of them spoke for a while. The only sound in the library came from the pages of the books as they rustled on the shelves.
All the empty pages.
Among them lay a man covered in stories.

If part of what makes for a fun, adventurous read is, as Bruce Coville once said, the “Cool Things Per Page” quotient, then this book jumps right to the head of the pack. From words moving on skin – a person literally part of a story – to the idea that “the pages of a book can be burned and the smoke inhaled … it has an effect on the reader,” to ‘Alphabugs’ – “they make their nests out of paper … the paper has to have words on it, and then the larvae hatch out and they eat the words.”

But no matter how great or creative an idea is, there still has to be character and story and Noon has that here in spades as well. Nyguist is a Sam Spade in an Alice in Wonderland world. We have no doubt that he will succeed in his goal, but the journey here is everything and this journey is about stories (“In this city you’re nothing unless you’re in a story”) and Nyquist has to sort out not only the murder but the stories surrounding him as well. “I don’t know where I am,” he says at one point. “I don’t know what story I’m in.” Together, Nyquist and reader will figure it out.

I haven’t enjoyed this kind of a read – speculative fiction – in a long time (other than the previous Nyquist volume) and it was an absolute delight to be here.

Looking for a good book? To use the words of one of author Jeff Noon’s characters from the book itself, “The Body Library is a novel, a book, and a rather special one at that.”  If you miss reading creative fiction of the sort that was produced so well by authors like Kurt Vonnegut, Jr., Harlan Ellison, or Philip K. Dick, then you must read Jeff Noon’s The Body Library.

*All quotes from an Advanced Reader Copy and may not reflect the final, published version of the book.