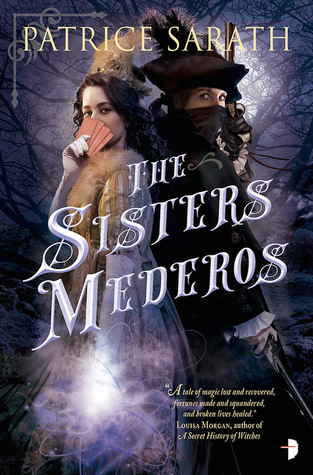 Once one of the wealthiest merchant families in Port Saint Frey, the Mederos family are now disgraced. Sisters Yvienne and Tesara Mederos are convinced that something, or someone, sinister has been at work to bring down the The House Mederos and they are determined to restore the family name and the riches due, and exact revenge. But their plans take off too well and move on beyond their control and they may be forced to take actions that they themselves find reprehensible. But Tesara is holding on to a secret thought that perhaps it was her fault – her magic – that resulted in the loss of the family’s fleet.

I was really drawn into this book quite well early on. These characters are strong and independent and I really liked that. I found the characters to be quite real and interesting, which is usually important for me to be pulled into a story.

Our setting is (or appears to be) around early 1800’s Italy and the fact that we have these strong women taking action and not needing to rely on men to finish things for them, or to open the way for them, is really refreshing. They each have skills that they use to get them what they want (and it isn’t just feminine charms).

But while I liked this book at the start it really wore down.  I felt that the story drew on and on, repeating itself and this bored me. Rather than a story unfolding, revealing information gradually along the way, we get a big dose of information early, and then we wander around for awhile before getting back into the story.

I was a bit frustrated by Tesara’s magic.  I never quite figured out if this is something rare in this world, or common. And we don’t really learn anything about the source of her magic – is this inherited? A gift?

Looking for a good book? The Sister Mederos by Patrice Sarath starts out well and offers strong female characters, but the story wanders and doesn’t really hold the reader’s interest.