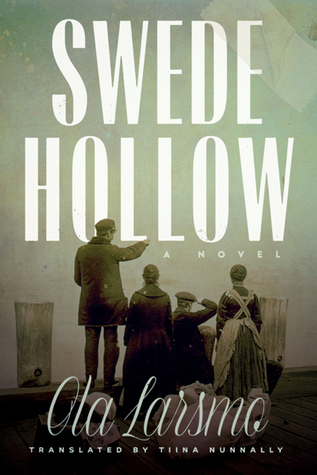 Gustaf and Anna Klar take their three children and leave Sweden for America in 1897.  Their arrival in New York is not the smooth venture they hoped for as Ellis Island is devastated by a fire just after their arrival.  Conditions in New York City also prove challenging to the immigrants with work hard to come by, especially for a man who doesn’t speak the language. And so the Klars move once more, this time to Minnesota, encouraged by someone they befriended on the ship crossing.

They settle in an area known as Swede Hollow. This is a rough community of Irish, Italian, and Swedish immigrants scrabbling for day job that might bring in a few pennies. It is not the sort of life that one easily puts behind them, but the Klars persevere and look forward, not back.

There were a number of reasons that this book appealed to me, mostly having to do with my own heritage. I felt that the struggles that the Klar family went through were not that unusual for immigrants (not then, not now). Imagine, then, how hard things must have been in order to leave the known life for something so uncertain.

Here is the one moment, however, that I felt was unnecessary … creating a dramatic reason for leaving Sweden. As evidenced by books such as The Emigrants by Vilhelm Moberg, and some of our own family stories, life in Sweden was extremely difficult and the challenges of raising enough funds to take a dangerous journey across the ocean for the possibility of a better life outweighed the conditions at home. They didn’t need the kind of motivation that the Klars had.

The hardships endured feel very real, but I really liked how author Larsmo instilled a stoic sense of perseverance among the family.   They never say out loud “keep your chin up” or motivate one another – it is just who they are. It’s a very familiar sense to many of us who grew up in a Scandinavian-heritage household.

I couldn’t help but make comparisons, as I was reading, to the previously mentioned The Emigrants (and succeeding novels) by Moberg. There are many of the same themes here detailing the struggles of Swedish immigrants in the late 1800’s. I would hope that anyone who might find one of these books interesting would go on to read the other.

Looking for a good book? Swede Hollow by Ola Larsmo is a book of historical fiction detailing the immigrant plight and struggles to make a better life in Midwest America at the end of the 19th century.  It is a valuable read.