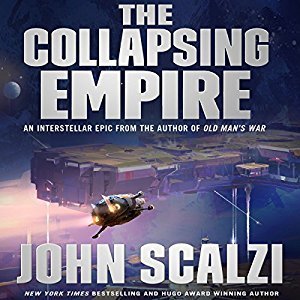 We’re many years in the future, but the laws of physics still hold true and it is not possible for anything to travel faster than the speed of light.  Still, mankind has managed to cobble together an empire spread throughout the galaxy.  Some are on planets, some inside planets, some in space stations.  Earth is no longer in the picture.  At the heart of the empire is “Hub” and furthest away from Hub is “End.”  Aside from an Emperox, what keeps the empire together is a natural(?) phenomenon known as “the flow.”  The Flow is a slipstream of sorts, carrying ships from one location to another in faster than normal (though not FTL fast) speeds.  The Flow has natural entry and exit ports and the locations for the empire were based on where these ports were.

But something is happening … the Flow is changing – something that only happens every few thousand years – and the collapse has been predicted by a ‘flow physicist’ on End.  That physicist needs to get the information to the Emperox quickly because the entry to the Flow from End will be one of the next things to change.  Unfortunately, there’s a coup going on at End, with another family looking to replace the Emperox.  What they don’t know on End, because it still takes a long time to travel through the Flow, is that the Emperox has died and because his son, the heir, had died before him, the new Emperox is the daughter, Cardenia Wu-Patrick, who has not been prepared for the role.

Cardenia takes command of the empire just as the Flow is collapsing and a rival family is looking to take over and her best friend and confidante is killed in an attack on her.

Author John Scalzi knows how to tell a tale and this first book in a new series really zips along with lots of action, enough intrigue to tantalize, and characters that are pulled from a catalog of stock characters but made interesting with Scalzi’s style.

Scalzi has a legion of fans and more than a few detractors.  He falls into that category where he is either a writer you really like, or one whose work you won’t touch.  Me…I like his style.  It’s direct and fun.  He offers plenty of humor, more than a little cursing, and characters to love and characters to hate and you never wonder which is which.

Scalzi also does a really tremendous job of bringing something new into the sci-fi world with each of his books and this is no different.  In fact it may be his world-building at which he most excels.

I listened to the Audible version of this book, as read by Wil Wheaton, and enjoyed Wheaton’s narrative.  Wheaton knows how to read the book with some energy and excitement, offering the listener the full thrill of the story.

But there is a down-side…  this first book has no ending.  Just as every other author seems to be doing, Scalzi has written an adventure that leaves the reader with more questions than answers and finishes right at the moment of rising action.  I definitely prefer a book that has a beginning, a middle, and an end.  Still – it’s a Scalzi adventure, and that’s worth more than the price of admission.

Looking for a good book?  The Collapsing Empire by John Scalzi is the first book in a new series by one of the most entertaining of voices in the sci-fi community.  It’s worth reading.