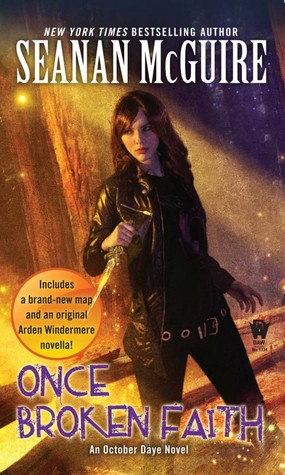 I’ve become quite a fan of Seanan McGuire/Mira Grant, and while the October Daye series has been on my radar to begin reading, I’ll have to admit that this is my first October Daye book (and it’s the tenth in the series).

While this book is mostly pretty straight-forward and a self-contained story, it was very evident that there is an awful lot of history here and that those of us just jumping in have missed out on a lot.

October Daye has traveled to the Kingdom of Silences to try to keep the peace between them and he home, the Kingdom of Mists. But now she’s back and she has a new cure for “elf-shot” (a sort of magic coma that can put a magical being to sleep for centuries without causing any other harm) and she’s has become the primary figure in a battle of political tug-of-war. October is the heir apparent for the troubled Kingdom, but she wants nothing to do with politics and leadership.

When one of October’s closest associates and friends is in mortal danger, she’ll be forced to make one of the toughest decisions of her life.

Seanan McGuire is quickly rising to become one of my favorite fantasy authors.  Bother as McGuire and as Mira Grant, she publishes a steady stream of fiction that is tremendously readable, highly original, and character-driven but intricate plotted.  This book is no exception to that list, but because it’s a long-running series to which I am a virgin reader, I spent much of the first half of the book simply trying to become familiar with this world and to understand the rules of how magic works here. In this sense I grew a bit bored.

But once I understood the landscape, I began to see the signature writing of a Seanan McGuire novel and became more deeply interested in the story and the characters.  Enough so that I now desire to go back to the beginning of the series and work my way through (local library, here I come!) and with the book ending the way it did, I, like most fans of the book, will be eager to see what Daye makes of herself.

The book includes a novella that was every bit as interesting as the book – perhaps even more-so for me as I had just become invested in the world.

Looking for a good book? If you read urban fantasy, you will want to have a regular diet of Seanan McGuire, and Once Broken Faith, the tenth book in the October Daye series, is  book (and a series) that you will enjoy.