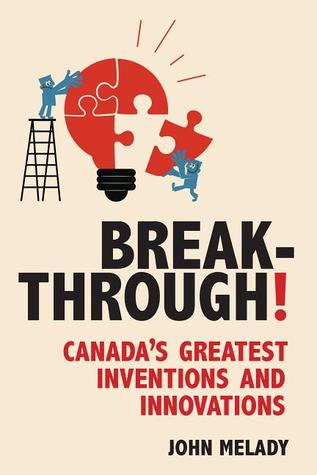 It’s sad how little I know about our neighbors to the north – Canadians and their country.  And I live in a border state.  But this book, Breakthrough!, by John Melady, lets us all in on a little secret … Canadians have done an awful lot to make the world a better place.

In a very readable manner, author John Melady writes a series of brief biographies of a number of Canadians who have contributed in a wide variety of manners, from the progress of technology to the creation of popular recreation activities.  Each one fascinating in its own way.

The book begins with Frederick Banting, the doctor who ‘invented’ insulin in the early 1920’s – still the most common drug for treating diabetes (I believe), and ends (appropriately) with Lester Pearson, Canada’s Prime Minister through much of the 1960’s, who spearheaded the campaign for Canada’s now iconic red maple-leaf flag.

Only two names here were familiar to me before reading this book, and both were surprises as to their connection with Canada: Alexander Graham Bell, and James Naismith.

Some inventions/innovations are small (such as the paint roller), but even those simple tools were ‘game-changers’ and so common-place today that we forget that there was a time when someone first came up with the idea.

Some creations seemed pre-destined to have been invented in Canada or by Canadians, such as the snow-mobile and the hockey goalie’s facemask, while others simply show that we don’t often think about who or where an idea was first nurtured (such as a high performance aircraft pilot’s flight suit).

Given the number of unique innovations first begun in Canada, why haven’t we heard more about this?  I think Melady hits on this a couple of times in his biographies, but most succinctly in his telling about Sanford Fleming (who gave the world the concept of standard time).  Melady writes:

And sadly, this being Canada, we never really granted him the praise he was due. Other countries put their heroes on pedestals; we forget ours.

Clearly Canada has had some great innovators, but what it hasn’t had … before Melady … is a great publicist – a flag bearer, a banner-waver, someone to remind the country (and the world) of what Canada has provided.  Hopefully that changes with this book.

Looking for a good book?  Breakthrough!: Canada’s Greatest Inventions and Innovations by John Melady is a wonderful resource and biography of many great men (sorry…no women) who hailed from Canada and the ideas that helped the world.