THE CUSTODIAN OF MARVELS – Rod Duncan 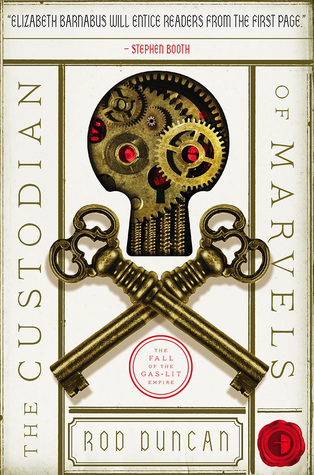 Rod Duncan is a genius and his Fall of the Gas-Lit Empire series will be much read and discussed for years to come.

In this third volume in the series, The Custodian of Marvels, Duncan builds a tremendous crescendo to the adventure of Elizabeth Barnabus and her fight against the agents of the Patent Office and the iron rule of the Gas-Lit Empire.  Helping her along the way this time is the circus dwarf Fabulo, whom we haven’t seen since the first book, along with Lara, Ellie and Yan, other circus performers, and new-comer Jeremiah Cavendish – a locksmith who once worked inside the Patent Office.  Elizabeth’s faithful young friend Tinker is also at Elizabeth’s side during most of the adventure.

The plan belongs to Fabulo and he assembled the motley band based on what each could bring to the table.  Elizabeth is requested because she was the only one who has actually fired the machine that “can punch a hole clean through an iron gatepost. And that from a mile away” which they intend to use to get through to the Custodian of Marvels who guards all the secrets of the empire.

I have so many thoughts bursting within me that I hardly know where to begin.  Suffice it to say that the day I saw it was available for review, I downloaded it and read it in three sittings.  In part because I really wanted to read this story, but also in part because author Rod Duncan has set this book at a breakneck pace.  I’m quite certain I could feel my heart racing at one point, about two-thirds of the way through the book, as the intrepid band of misfits were facing exposure and capture before they could execute their plan.

With only a couple of little side-tracks along the way, Duncan has really tightened the story with this book, focusing on the end goal and driving everything forward to that end.  This adventure-thriller style is much more reminiscent of the first book (The Bullet-Catcher’s Daughter) than the second (Unseemly Science).

***WARNING — POTENTIAL SPOILERS AHEAD — READ AT YOUR OWN RISK***

Part of what I liked so much about this book (and the series) is that Duncan doesn’t over-explain things.  He trusts the reader to be intelligent enough to make discoveries and to put some of the pieces together.  Some of us may be a little slower at seeing these pieces than others, but that’s part of what makes this so fantastic to read.  For instance, nowhere is it explained flat-out that the machine Elizabeth is to use to cut through to get to the Guardian is a laser.  What we know is: “A faint whirring issued from the machine and a beam of light, pencil thin, hung in the air before my face” and after aiming at a door and snapping through the lock “I’d seen nothing, but knew that all the energy of the reagents had been consumed in a span so short that no eye could have detected it.”  How many authors would have felt the need for Elizabeth to find an ‘instruction manual’ or the writing on the outside of a box labeling the machine to make sure the reader gets it?  To many, I’m afraid.

And while Duncan reveals much more about the Empire and the Patent Office, I realize that there have been clues all along the way, specifically the dates as to when this action is taking place, making this an alternative history steampunk story.  Or is it?

Many questions were answered here, but for all those answered, there are still questions remaining.  Some new, revealing themselves from behind closed doors.  Even though I’ve warned of spoilers, I don’t want to give too much away.  This series is a journey that the reader deserves to enjoy from as innocent a perspective as possible.  But I will say that some of the historical timeline doesn’t quite add up, which is what makes me want to read still more.  There’s another puzzle out there and Duncan has given us a few new pieces to suggest what it might look like.  Is there another book planned, or is this it?

A word or two on romance.  Rod Duncan has teased us with a romance between Elizabeth and Patent Officer John Farthing through the previous two books.  I thought Duncan’s handling of this relationship was spot on in this volume.  It was never too much, nor even too little. As Elizabeth says of Farthing, he is “a man who always confused my emotions” and that stays true here, but Elizabeth is much more focused now on a job ahead of her.

It is interesting to note that much of what we knew of Elizabeth from the first two volumes, specifically her talent at hiding her identity and being seen as her own brother, does not come in to play here (other than as a token moment when she uses her skills on someone else).  Also, Elizabeth’s friend Julia Swain has a much-reduced role here as well.

And while this story is pretty much straight-forward, one of the few little side paths is a revenge moment that will keep the reader on pins and needles all the way until a bit of humor lets the reader laugh and relax from the tension.

Let me finish here with a brief comment on Duncan’s writing.  It is so crisp and clean that he paints such a clear picture of his world.  It is so easy to see this almost-Dickensian future.  He captures details but manages to do so without it feel over-written.  For instance:

Footmen hurried to open the doors, whereupon two women emerged, dressed in outfits of yellow and green.  It was a wonder that such a volume of skirts could have fit within the carriage.  The women seemed young to be carrying such a weight of clothing.

It’s a small moment of observance, but it paints a picture so clearly.  And later:

Sleeping in ditches and under hedgerows, I’d thought my clothes couldn’t become more soiled. But rolling into London on the back of a wagon, I found a different kind of dirt.  Oily, metallic and sulphurous, it insinuated itself through the air, coating every surface. And, by stages, it worked its way into the very pores of my skin.

Not only can I see this, but I can smell it as well.  And for a moment when I can ‘hear’ it: “A breath issued from the room, like a sigh.”

This was such a fantastic book and series of books.  I think that there is so much more in here that I haven’t discovered on one reading.  Just writing this review I think back on moments and realize that there are puzzle pieces that I may have over-looked.  And the fact that Duncan leaves some of the answers to the reader has me thinking that I may want to start a reading group just so that I we can read The Fall of the Gas-Lit Empire series and share moments and discuss and argue about what the author ‘really intended.’  To me, this is the mark of a great book – one that will have me thinking about it long after I’ve read it.  One that I want to talk about with others.

Looking for a good book?  This is it: The Custodian of Marvels, by Rod Duncan.  You’ll want to read the first two books in the series, but this is a series that will amaze and delight.  And just like the Bullet-Catcher who tries to misdirect your attention, there’s a lot going on here and you will want to pay attention.

The Custodian of Marvels

series: The Fall of the Gas-Lit Empire #3

ebook/paperback – to be published February, 2016