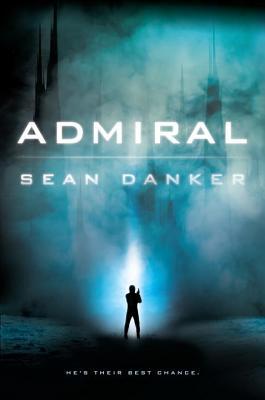 There was a time when I wouldn’t have even considered reading a military fiction book, even military science fiction. But the descriptions I had seen for Sean Danker’s Admiral looked really appealing to me so I thought I’d give it a read. I’m glad I did.

A ship in deep space has for sleepers (individuals in a cryogenic stasis) aboard.  They are members of the Evagardian Imperial Service. The ship loses power and brings the individuals out of their sleep.  They all seem a bit groggy and unfamiliar with one another.  The last to wake is in a sleeper pod bearing an admiral’s insignia. And so the individual takes command over the other three (an ensign, a private, and a lieutenant).  But is he really an admiral?

They find themselves stranded on a planet, their supplies running out, no way to send a distress call, and their limited sensors indicate they may not be alone.  Can someone who may or may not really be an admiral command this small team and keep everyone safe until help arrives?  Will the three others support and follow the one they think is possibly an admiral? Why did their ship suddenly lose control? Where are they and is anyone else near?

Sean Danker has written a powerful science fiction mystery with a great deal of suspense.  There are some shades of Alien here, but this story is much more about the four protagonists. Who are they? Who are they to one another? Who are they to those who sent them out on the ship?

The action is intense and because we get to spend some time with each of the four protagonists we get to experience their concerns and fears, which compounds our own. I felt as though we never really know what is happening, but that puts the reader in the same position as the characters. This helps us empathize with them, creating an intense experience.

This book was Danker’s debut, and he really hit a homerun.  There are now six books in the Admiral series as I write this and I’m definitely going to go look for the next one right away.

Looking for a good book? Admiral, by Sean Dankers, is a solid, suspenseful, sci-fi mystery, well worth reading.