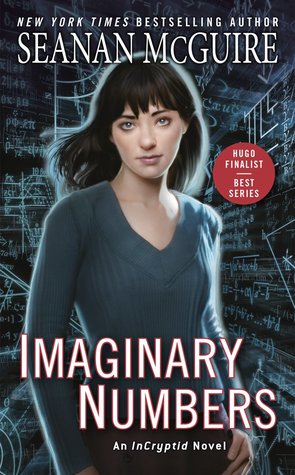 If you’ve been reading my reviews for any length of time you should know that I’ve become a tremendous fan of Seanan McGuire’s work,  I believe she consistently has the best most regular, best urban fantasy being published today. Her world-building is fantastic (and I mean that word in all its definitions) and well-defined. Her characters are unique and relatable and always seem so real.  They deal with personal issues as well as the big picture problems around which the plot is built.
Though my memory is a little fuzzy and I’m probably remembering this a little incorrectly, I once heard the great Theodore Sturgeon respond to the question :”What is the difference between writing short stories and writing novels?”  His response was, “Short stories are about things people do and novels are about people, who do things.”  McGuire’s novels are definitely about people.  But let’s not sell short the things these people do, because McGuire’s stories are also well plotted.

The Price family are cryptozoologists – a bit on the eccentric side, their goal is to protect the magical creatures of the world who are living in secret (or trying to) among the human population.

Adopted into the Price family is Sarah Zellaby. As much as she’d like to think of herself as Price, she will never get away from who she really is – a cuckoo … “a telepathic ambush predator closer akin to a parasitic wasp than a human being.” If her nature takes over, everyone she considered family or friends are possible targets for her predatory nature.

Sarah is returning to the family compound and both she and her close friend Artie are happy to reunite. But Sarah has come to the attention of other cuckoos who have taken up residence near the Price home.  There is bound to be a clash. Between Sarah’s core and who she has known herself as her entire life, and between the apex predator cuckoos and everyone around them.

By staying close to Sarah, Artie puts himself in extreme danger, but he’s not about to abandon their friendship now that she’s returned.

This book is definitely a cliffhanger, leading up to something big.

In signature fashion, McGuire includes a short story/novelette at the end of the book.  This one, “Follow the Lady,” has the character Antimony returning home from a recent excursion (which takes place before the events in this novel) and relating some gathered information (which will likely be important in the next book).

Looking for a good book? Imaginary Numbers by Seanan McGuire is the 9th book in the InCryptid urban fantasy series. It is fast-paced and there is a lot going on, so pay attention, but do read it.