CAPTAIN MOXLEY AND THE EMBERS OF THE EMPIRE – Dan Hanks 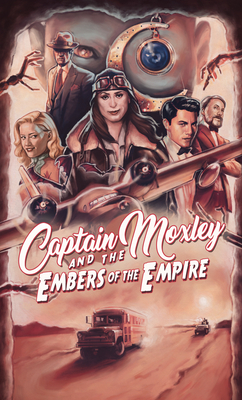 It is 1952 and World War II is over, but it’s still fresh in people’s minds.  And when you’re an ace fighter pilot who worked privately for a secret branch of the U.S. government, you’re now out of work and looking for excitement.  Samantha “Sam” Moxley is that fighter pilot – a dominant woman in a male-dominated service. Sam steps up and takes charge when things get tough and she thrives on adventure.  Now she realizes that the organization that she once worked for, known as “The Nine,” has to be stopped from getting their hands on a special key that leads to the renowned Hall of Records.

Sam pulls together a team to help her because she knows first hand the resources that The Nine have to draw from to get what they want, and right now they want Sam’s sister.
It’s hard to imagine any reader picking up this book and not making the comparison to Indiana Jones or Benjamin Gates. In fact the book almost relies on the reader being familiar with the action hero stereotype.  Knowing the type, we then know how unusual it is for a woman to be in the role and the author doesn’t have to work too hard defining the character.
The plot and story are right out of the adventure movie world – stop the bad guys (played by big government) from gaining too much power (because we know that absolute power corrupts absolutely).  But there will be obstacles in the way, often with a supernatural bent to them.
Author Danks Hanks cranks up the action and keeps it revving through the entire book. I’m not sure this is good, though.
The action seems to hold steady at an even pace, so it stops feeling exciting. This pace sort of works when you are watching a movie like The Mummy, Tomb Raider, or, yes, Indiana Jones, but in a 370 page book we need a little more character development time with action folding out of the plot, rather than the plot simply being the action.
The supernatural elements that are hinted at are never fully brought to light.  Perhaps this is held back as a teaser for further adventures, but it comes across as sloppy writing – a forgotten element left unfinished.
I had really enjoyed another pulp-style action book from publisher Angry Robot a little while back and so looked forward to continuing the trend, but this particular venture doesn’t work. I liked the idea and I think I’d like the characters if I got to know them.
Looking for a good book? Captain Moxley and the Embers of the Empire by Dan Hanks is a recreation of the Indiana Jones adventures with a woman as adventurer protagonist. There’s plenty of action but it’s not built around a terribly exciting story.

I received a copy of this book from the publisher, through Netgalley, in exchange for an honest review.