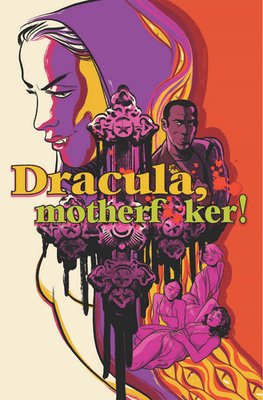 It’s Los Angeles in the 1970’s (1974, to be precise) and Quincy Harker is a crime scene photographer. He is recognizing a killing pattern as the works of the infamous Dracula, but who would ever believe him? Well, Dracula’s minions might.  Nearly 100 years earlier, Dracula’s brides, seeking to live out their own undead lives, nailed their master to his coffin.  Now they are back as Dracula is making his presence known once again.  But are the brides back to assist their master, or are they looking to continued what they started a century earlier?  Is Harker a tool to the brides’ achieving their goal, or because of his knowledge is he a danger to Dracula’s return?

I’m a sucker for any vampire/Dracula-related book or graphic novel so this was easily something I was looking forward to.  What I found was a real mixed book.

The story, by Alex de Campi, is very much a one-note story. Some of Dracula’s victims/spawn are rising up against him, but since they aren’t as powerful as he, they have to be more surreptitious.  Okay. And then what?  Seriously, this is Dracula we’re talking about.  One of the most fearsome ever created in literature so there should be some real page-turning danger present – we should be expecting the worst at any moment and that danger just isn’t here.

What IS here is some really fantastic art by Erica Henderson. Henderson captures the colors and the lines of the 70’s. I was eager to turn the page not for the story, but to see what beautiful looks would be next.  I was also tempted to break out an old black light to complete 70’s vibe.

I’m glad I checked this out and the art is a real treat, but as a complete package – art and story – this is a bit hollow.

Looking for a good book? Dracula, Motherf**ker!, a graphic novel by Alex de Campi and Erica Henderson is visually striking but lacks the grit and gristle of a good vampire story.