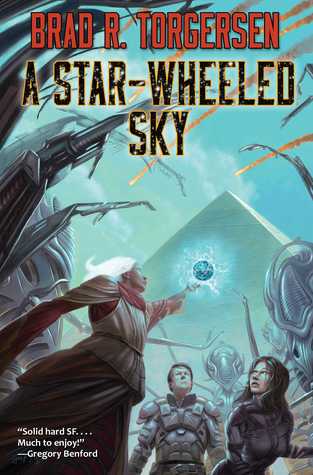 Based on a number of Brad R. Torgersen’s shorter works, I felt that Torgersen was one of the best sci-fi writers currently writing and I told him so in a Facebook message (to which he very kindly replied).  But I have been less enthusiastic about his most recent novels, including this, A Star-Wheeled Sky.

A long time ago (from our very distant future) humans left Earth, to find other planets to settle, in ships that were slower than speed of light. Getting to any potential new settlement would take generations. But on the journey they discovered the Waywork – an alien super-highway that provides nearly instantaneous travel to and from different star systems. The number of systems is limited and humans, being humans (human nature just never seems to change), have completely taken over these new systems, setting up unique governments – which of course leads to disagreements, fights, and wars between the human settlements.

When war is nearly inevitable between two diametrically opposite ruling factions, a new Waypoint appears. A race is one to see which faction (aka ‘Starstates’) can get there first to gain control and expand their empire.  But one of the most vicious regimes in the Waypoint is also on the hunt.

Torgersen definitely has a knack for military sci-fi and it is in the battles and the battle planning that he shines brightest here.  He can’t seem to not add a moment or two of religious contemplation as well (it didn’t bother me here the way it did with the previous novel of his that I reviewed, and I think it was only because of this that I took notice).

I had a nagging feeling all along as I read this that someone, either Torgersen or his editors, were trying too hard to fit a mold to appeal to the widest possible audience. But by doing so, it’s created a rather bland, almost generic, sci-fi adventure.

I sincerely hope the next one stands out.

Looking for a good book? Brad R. Torgersen’s A Star-Wheeled Sky isn’t a bad sci-fi adventure, but it won’t likely excite too many readers.