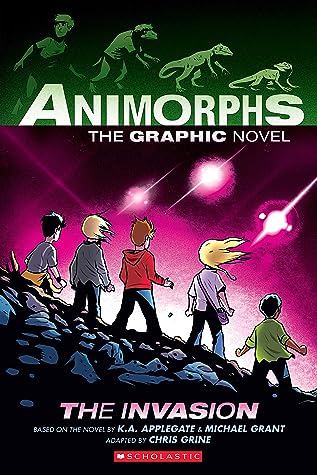 I absolutely loved The Animorphs book series by K.A. Applegate.  I worked in a book store when they first started coming out and I was constantly recommending the series.

The story in a nutshell: a group of young kids (Jake, Rachel, Cassie, Tobias, and Marco) witness an alien spacecraft coming down .  A creature emerges – an Andalite (looks like a blue, short-necked giraffe).  The Andalite is dying and he’s escaping the evil Yeerks (they look like giant cockroaches).  The Yeerks have already invaded Earth but they remain hidden and rely on their being able to control the humans unseen.

Before he dies, the Andalite gives the kids a unique ability … when they touch an animal, they can capture the animal’s DNA and then transform themselves into that animal.  But if they stay in that animal form for longer than two hours, they will remain that animal for the rest of their lives. Jake, Rachel, Cassie, Tobias, and Marco may now be Earth’s only hope to rid the world of Yeerks.

This story, originally by K. A. Applegate, is quite intense and actually very dark.  While there’s awe and wonder at exploring what it’s like being an animal (what a cool idea!), the underlying threat is always present. And when the kids learn that some of the humans who are being controlled by the Yeerks are adults that they have trusted their whole lives, things get even darker and scarier.

There’s a lot of ‘cool things per page’ – changing into animals, experiencing even the most common things through an animal’s (or insect’s) eyes, cool blue aliens, scary cockroach aliens – the book is full of wonders.

But at its core, this book is dark and scary as the fate of the earth is in the hands of frightened pre-teens.

Dark and scary is okay, even in children’s literature. (Does anyone still read Grimm’s Fairy Tales?)  Let’s just not pretend it’s something other than this though.

And that’s what this graphic novel does.

The artwork in a graphic novel sets the tone and whereas art that evoked Dark Knight would be apropos here, instead we get Scrooge McDuck.

I think that Chris Grine’s artwork is totally wrong for telling this story.  His animals are fine (hawk, tiger, gorilla, elephant, etc).  In fact, they are the most realistic part of the book (I know … somebody’s going to write “maybe that’s the point” — really? the animal that was morphed from a child because of the stolen DNA is more real than the kids?). But his humans are very cartoon-y.

And can someone please explain to me why everyone, even these pre-teens, looks like an alcoholic with rhinophyma? Big, bulbous, bright noses on everyone, all the time.

This seriously bothered me the entire book – it was very distracting.  When we first see the kids (page four), I honestly thought we were going to get a new story line about the kids having a cold. But it quickly became clear that this was just the art style.

I love the Animorph’s series, and if this builds new readers who will check out the original books, then I’m all for it.  But I don’t believe that this style of reinterpretation does any favors for the franchise.

Looking for a good book? Go find one of the original Animorphs books and give that to the young reader in your life, and pretend the graphic novel, The Invasion, by K.A. Applegate and Chris Grine doesn’t exist.