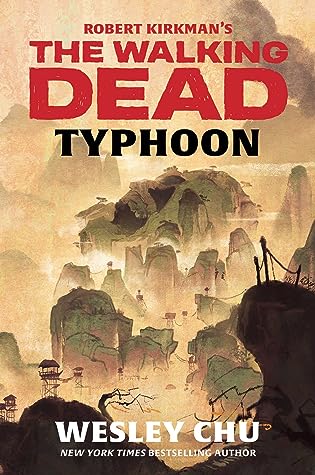 Honestly … the main reason I wanted to read this was not so much because it’s a “Walking Dead” novel, but because it’s by Wesley Chu.  I’ll read just about anything by Chu (though I’d prefer to read more in the Time Salvager or Io series’).

China has been hit particularly hard by the outbreak that creates the walking dead (called “jiangshi”) – there may be upwards of one billion jiangshi roaming the country.  Survivors have clustered in large groups and created new settlements to best defend themselves from the walkers. These settlements bring together people of all backgrounds and from all walks of Chinese life, each now tasked with new day-to-day jobs for the good of the settlement.

At one such colony, known as Beacon of Light, we meet Zhu, once a poof, rural farmer, Elena, an American student taking a gap year to teach English to Chinese students, and Hengyen, a can-do military officer who firmly believes that the Chinese military will overcome this problem.

There are some 3,000 other citizens in Beacon of Light encampment which means there are a lot of people who need to be fed. The most consistent source of food comes from scavenging the homes and towns around them, but each scavenging raid means going further and further out, which of course has many dangers as the scavengers get further away from the safety and protection of the settlement.

On one such scavenging mission, Zhu finds himself in his home village and discovers that there are other survivors who’ve made their own small, protected settlement.  Zhu isn’t sure if he should leave them alone or encourage them to join Beacon of Light.

Meanwhile, a typhoon of jiangshi are soon going to engulf the countryside.  The leader of the settlement assigns Hengyen with the task of rounding up anyone not in a protected settlement. Zhu, is even more conflicted given his love of the American, Elena. Does he run with the villagers who will attempt to flee the approaching tidal wave of walkers, or does he stay with Elena and Beacon of Light, which will surely be overrun.

While I watched The Walking Dead television show somewhat faithfully for the first three seasons, I never had the burning desire to make sure I stayed with it to see what would happen next.  It’s on my list of things to watch ‘someday.’ So I am somewhat, but not intimately, familiar with this series.

I liked Chu’s storytelling a lot, and I really appreciated this look at The Walking Dead world from an entirely different cultural point of view.  But at the same time, what as worked so well (for me at least) with The Walking Dead has been the set of characters, even though rotating in and out. This book could be any zombie novel.  There’s not much tying it to Robert Kirkman’s The Walking Dead other than that title. Maybe that works in its favor; maybe some readers want their zombies but are tired of the same old group of people.

I enjoyed this for the story itself, but not as part of The Walking Dead series.

Looking for a good book? Wesley Chu brings to life (pun intended) a story of love and conflict in a strange time and a strange land in his foray into Robert Kirkman’s The Walking Dead: Typhoon.