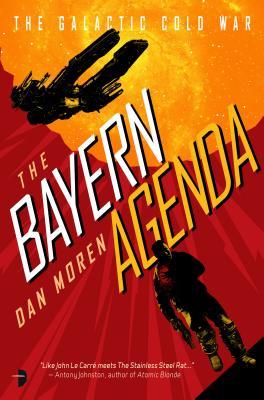 There’s a saying (which most of us are familiar with) that there are two things which are inevitable … death and taxes.  If you were to add a third item to the list of ‘inevitables’ it might be that where two or more humans are gathered, there will be a cold war.

Simon Kovalic is a top intelligence agent for the Commonwealth of Independent Systems (ie: the good guys). There is a very hot Cold War going on with the very aggressive Illyrican Empire and Simon is right in the middle of it all.

Kovalic and another member of an infiltration team are rescued from a mission (Kovalic is injured and another team member was killed) and Kovalic is immediately assigned to a new mission.  The Illyrican Empire, it seems, is working quite dilligently to make friends with the Bayern Corporation.  The Bayern Corporation … think “Swiss banks” on a planet-sized scale. If the Empire can get a foothold in the banking system they could easily bring the rest of the worlds to their proverbial knees.

Kovalics handler for this new mission is his ex-wife (Natalie Taylor) and the two may have a few things to work out still.  But Natalie and Simon will need to trust one another, and Kovalics team will have to trust that the two can work together, when word gets to Natalie that the Empire is expecting and waiting for Kovalic’s team.

This book starts out with an exciting space opera-style scenario. There’s a clear mission, secrecy, and well-trained agents who, after everything goes awry and one agent is killed, manage to keep an entire squadron at bay until they can be rescued.  It’s fact and exciting and we get to know our primary character pretty well.

It’s a great set-up, except … it feels like much more than a character set-up – that the information they get here is going to be essential to some other part of the story, and that’s just not true. This is too bad because tying it together better and not just using the opening scene to establish character, really could have pushed this to the next level.

I did enjoy this spy/thriller scifi book and I look forward to more adventures of Simon Kovalic, but I was definitely expecting something, based on the opening, that didn’t follow through.

Looking for a good book?  The Bayern Agenda by Dan Moren, is a good scifi thriller read, but don’t be fooled by the opening scene … the intensity of the action at the beginning will not be repeated.