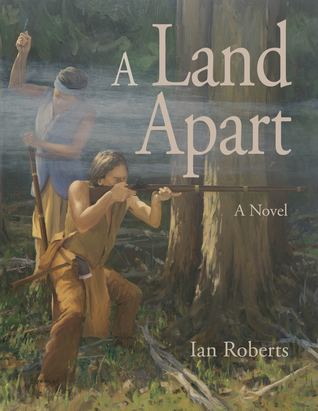 Have you ever visited a historical site – in the U.S., these places are usually identified with brown signs signifying they are places of historic significance – and then gone into the visitor’s center at this historic site and seen the plethora of memorabilia that is somehow connected with that site, usually including plenty of books (fiction and non-fiction) written and published by local authors?

I am the guy who buys those books.

While Ian Roberts’ A Land Apart wasn’t purchased at a regional historic site, the feel is pretty much the same.

The story is about Etienne Brulé and his part in the French colonization of Canada in the very early 1600’s. Not surprisingly, his life in and among the natives (arming the Wyandots to be able to defend themselves against the Iroquois who’ve been armed by the English) plays a major part in Brulé’s time in this land.

I have to admit that I know (knew?) next to nothing about Canada’s early explorers – which is precisely why I like this sort of book.  It’s packed full of history (presumably well-researched) and told in an easier (narrative) way to make the reading enjoyable.  Or at least that’s the idea.

Ian Roberts does a very strange thing here with the actual writing of the book.  He tells this story in third person historic present tense. The idea, I think, is that this is supposed to make us feel the immediacy of the moment much more when the action is taking place now, rather than looking back on it. But for me the effect was just the opposite. I struggled constantly through the book because the narrative just felt wrong to me. While I recognize that this isn’t the first book to be written in this tense I’ve noticed that those I can recall I have not rated very highly.

I believe that present tense is hard to sustain in a novel. It is much easier in a film or stage script.  And there we have the crux of what I consider to be the problem here.  In his Afterword, Robert’s tells us that this story started out as a film script that a dear friend insisted that he write.  When nothing came of it, he put it aside until one day when a friend who had a copy of that script told Roberts that he should do something with this story. And now it’s easy to see why this style was selected … it had already been written this way, for a different format, and of course it’s easier to rewrite when you keep the tense in which it was first written.

Let me randomly pick a scene in the book:

Brulé, tomahawk still in hand, now slams it down on the noble’s table itself, splitting it in two. …

Brulé is furious that he has let this priest get to him again. Behind du Barre, he sees LeCharon stepping into the water just beyond the gap at the end of the palisade. Near the priest, two soldiers talk. One leans against the edge of the palisade, the other nestles himself in the fork of a tree to have a view over the palisade wall into the forest. Another burst of laughter escapes from the four Algonquin on the other side of camp. A drunken laughter. And not far from them, six French men lounge against the palisade wall.

“Who are they?” Brulé asks.

“The company’s new men,” answers du Barre. “Those that will replace you.”

But Brulé is already striding towards them. His frustration and fury with the priest now overflow at the sight unfolding before him.

This definitely has a film script sense to it.  Rather than writing description for a read, this is written as description for a director to paint a scene.  And given this, I would much rather have read this as a script (though I suppose that aren’t really that many readers who are familiar with how to read a script).

This didn’t work me.  Maybe it would have if I’d known at the start that this was a (slightly) converted script-to-novel. And this is too bad, because I think the story could have been quite interesting.

Roberts also illustrates this book with some fine drawings.

Looking for a good book? A Land Apart by Ian Roberts is a nice, historic, Canadian story but the story format doesn’t appeal.