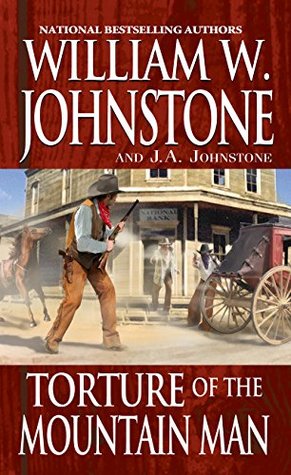 In Audubon, Texas the sheriff, Andrew Peabody, is out of commission when, while trying to arrest a criminal, a bullet rips through his chest.  The local doctor says it doesn’t look good – the bullet is too close to the heart and he knows he doesn’t have the skill set to remove it safely.  But it so happens that Peabody’s deputy sheriff, Dalton Conyers, happens to be brother-in-law to one of the most renowned surgeons in the world. He’ll wire his sister and ask if her husband can come and help.

There’s never a good time to be without the sheriff, but it couldn’t be much worse.  The railroad company is sending tens of thousands of dollars to the Audubon bank so that they can hire laborers to construct a new line. But a tough gang of criminals are going to try to get that money for themselves.  Enter Smoke Jensen, a tall, tough, fast-drawing mountain man who evens the odds just by showing up.

I’ve generally enjoyed the Johnstone books I’ve read in the past few years, but this one kind of let me down. Though William W. Johnstone’s name is in large print on the cover (he died in 2004) and niece J.A. Johnstone is attributed to carrying on the brand from the elder Johnstone’s notes, this book did’t have the same ‘feel’ to it.

In general, I found the author of Torture of the Mountain Man to be talking down to the reader.  We couldn’t be trusted, it seems, to pick up on hints and clues – things needed to be repeated.

“Why was it you tried to kill im?”
“On account of he is the son of a bitch that kilt my brother.”
“So, that’s how come you know ’im, huh? ’Cause he kilt your brother?” Claymore asked.
“Yeah.”

We also have a fair amount of characters asking leading questions, just to get a little information dump.

“Yeah, I remember Cutter MacMurtry. I remember his brother, Hatchett, too. They both worked for Pa until Cutter got arrested for killing Father Grayson and his wife and two little children. All for just over a hundred dollars as I recall.”

Although my favorite is still the simple, direct approach: “By the way, captain of what?”

I typically see this kind of writing in self-published or small press publishers, but I don’t expect to see it when there’s a respected author’s name attached to it (even if it is just a brand now).

I don’t remember having any issues with this style of authorship with the previous Johnstone books I’ve read.

The story arc is decent and very direct.  There’s not much subplot going on here.  Bad guys. They want to steal things.  Good guys need help and the hero arrives. It was entertaining enough to keep me reading, despite my feeling treated like a novice reader.

Lastly … I don’t understand the title.  Torture of the Mountain Man. The “Mountain Man part I get.  That’s Smoke Jensen.  This 46 book series is called The Last Mountain Man.  But where… what … was the torture?  The word Torture itself is used only once … in the title of the book.  It does not appear anywhere else (we can check these things pretty easily now). And that’s okay to not actually use the word, but I expected to see Smoke feeling tortured (if not actually physically being tortured), and I did not.  This strikes me as nothing more than hyperbole to make the book sound much more exciting than it is, and that, along with the writing style, now has me just a little leery about picking up another book by the author(s).

Looking for a good book? Torture of the Mountain Man by William W. Johnstone and J.A. Johnstone doesn’t quite hold to the excitement and quality of previous books by the authors, but if your OCD won’t allow you to miss a volume in your collection, you might still find something to enjoy here.

Torture of the Mountain Man