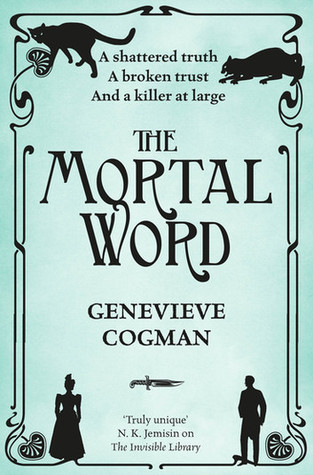 “Peace” is the word as the dragons and the Fae are negotiating for a peaceful accord between the two nations. But the talks are being challenged when a key diplomat in the process is killed, stabbed in the back.  To investigate, both sides agree to bring in Irene Winters – a bit of a rogue Librarian and spy.

The Library – the organization that Irene works for – is a secretive library organization in which Librarians travel between different realities stealing special books in order to make sure that the most important works are preserved.

Now Irene has to work with both factions to find out who the murderer is, and why he or she wanted to damage the peace talks.  Helping Irene is Peregrine Vale, a talented detective whom Irene trusts, and Kai, a dragon prince who trained to be a Librarian and who now may be romantically involved with Irene.

There are plenty of suspects in and among the group of negotiators, but Irene is not one to rush to judgment.  She needs to move quickly, though, because someone doesn’t want her to get too close to discovering who has done this.

This series has taken the reader on many adventures and if we’ve come to learn anything it’s that we don’t really know what we’re about to get into. Although we still have dragons and Fae and a lot of animosity, this book was less robust action and more about solving a mystery.

The story moved along swiftly and the book was finished before I knew it, though I never felt that this was a ‘page turner’ for me. I also never really felt that the peace talks were in danger. While the whole point of Irene being there was so that the talks could continue, I never got the impression that they wouldn’t.

Irene really is no longer a trainee or new-comer to the work of the Library (I believe she even references this at one point), and a big part of the fun in the early books was that she was finding her way. I see this book as the first big step in her maturing and seeing things in a different way.

I feel like I should like this series more than I do.  The concept is great and the world(s) is well defined, and the characters are unique and brilliant. But I just don’t manage to connect with these people.  I enjoy the books fine, but I definitely don’t get the same overwhelming glee as many other readers.  This book in particular was one of the weaker ones for me, in terms of bonding with the characters.

I’ll look forward to the next book or two, and hope that I can really connect with the characters.

Looking for a good book? The Mortal Word by Genevieve Cogman is the fifth book in The Invisible Library series, focusing more on other inhabitants of this world (dragons and fae) than on the Library. The mystery is well done, though the outcome was never in doubt.