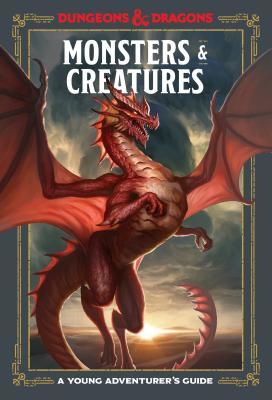 I first played Dungeons & Dragons (or “D&D” as it’s commonly known) back in 1977.  A number of the people I first played with are still good friends (some have passed on, with others I’ve simply lost touch).  And while I was never able to get my own children interested in playing D&D with dad, my 23 year old son now has a regular group that gets together, some of them online, three times a month, to play the latest edition of D&D.  Which is to say … D&D certainly has staying power!

For the most part, D&D is adaptable and playable for any age, though some of the manuals might get a bit complex.  Finally the publishers of D&D manuals are offering up a quality book of monsters and creatures that are likely to be around and good campaign.

The artwork is something that will be noticed first and foremost by anyone considering this book.  There aren’t a lot of lavish scenes – this is mostly a painting of a creature at its fiercest with just enough other background to identify a habitat.  But the artwork, credited to “Conceptopolist,” is really top notch. This is exactly the kind of art one expects to see in a D&D manual.  It’s sharp, strong, and evokes strong emotion.

The written detail on each beast is only two or three paragraphs long – just enough to get a feel for what makes the creature dangerous. It’s brief, but works very well for the target audience.

What I like the most, I think are the “DO’s” and “DON’T’s” for each creature … “DO THIS: Aim wide. Their displacement ability means these wicked beasts are never where they seem to be. DON’T DO THIS: Don’t stick to a schedule. Displacer beasts are clever enough to remember the schedules of travelers passing by on a regular basis…”

The category of beasts is broken down by terrain type (Caverns & Dark Places; Forests, Mountains & Other Terrain; Moors, Bogs & Boneyards, etc) and as we begin each new terrain there’s a short scenario, as if a Dungeon Masters was telling the players what they see ahead of them. This wasn’t necessary for me, but it might be nice for the young DM to get a feel for how to set up the action.

All in all, this was a nice book and I can easily see giving this as a gift to the young role-player – but I wouldn’t want to face any of these creatures on my first foray into a quest!