TO THE STARS – George Takei 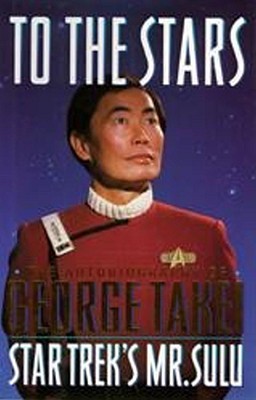 If you are considering buying this book, then you likely already have a pretty good idea of who George Takei is. Most will know him from his being a regular on the original Star Trek television series (and movies). Younger audiences will know him for his social media presence.

In this biography/memoir, Takei talks about his early family life, which includes time spent in internment camps in Arkansas and California during WWII when George was quite young. Once out of the camps, the family returned to Los Angeles and lived in a “the largest Mexican American barrio in the United States.” In his early life after the camps, we get to know a little more about George Takei the student (high school and college) where we learn that Takei is motivated and competitive.

Takei is fortunate to get some early, professional acting, while in college, which put him in contact with some big names in American film. And then he went in for an audition/interview for a regular role on a potential new television series called Star Trek, where the producer was unlike what Takei had seen in other Hollywood types.  He had good feelings about the man and the show even back in this very early stage.

Takei writes about the camaraderie among the cast members … with one exception.  Star William Shatner appears to have been more focused on building his own stardom than on working with anyone else.  The two most telling moments from this book are an early days moment when Takei brought some family to the studio for a tour of the set and when Shatner walked into the studio, Nichelle Nichols calmly steered the family in another direction so that there would be no interaction between Shatner and the guests.  And when filming was completed for the first Star Trek movie that Leonard Nimoy directed, the cast all pitched in to throw a big celebration party for Nimoy.  All except Shatner who claimed he was going to do something else for Leonard, but when crew members thanked Shatner for the party, he gladly accepted those thanks.

While Takei makes it clear what he thinks/thought about his ego-obsessed co-star, he is definitely politic in the way he describes it.  Which makes some sense because after his Star Trek work, Takei delved into politics. The final chapters of the book follow Takei’s work in politics, the Star Trek movies, and just a little bit about Star Trek: The Next Generation, and ending with reflections on Gene Roddenberry’s death.

For those of us who are admittedly Star Trek fans – Trekkers (or Trekkies, depending on which generation you are from) – most of what Takei writes about his Trek days has long been circulating among the fans.  Mention something at a Star Trek convention and people all over the world will start repeating it as gospel.  It was nice to read it directly from the source.

For me, I liked some of the non-Trek reflections. His sense of family and the lessons he learned from his father are really touching and I think more important. It is so like a father to ‘encourage’ a child to take some earnings and invest it so that there is something for the lean times.  I never knew about this side of Takei (the early investor in real estate).

The book only goes up to the early 90’s, so there’s 30 more years worth of material that Takei could easily (?) do a follow-up biography.  I was a little disappointed not to get anything more directly personal (specifically what it might have been like to work in Hollywood as a gay man), but since he didn’t ‘come out’ until the early 2000’s, perhaps that will be part of the (my wishful thinking) autobiography, volume two.

Looking for a good book? To the Stars, by George Takei, is an autobiography of one of Star Trek‘s stalwart crew members whose early life in an interment camp during WWII and his political activism are as worthy of reading about as is his time as the Enterprise‘s helmsman.