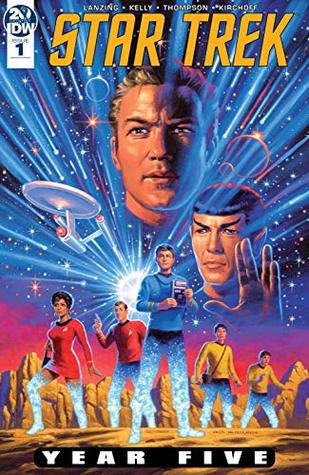 Reading the old, Gold Key Star Trek comics, and then the John Byrne manipulated photo comics got me interested in seeing what the new Trek comics looked like.  As I’ve been impressed with Amazon’s comic-reading app on my phone, I decided to buy this first issue of “Year Five”.

The book starts off quite ominously with Captain James T. Kirk sitting in his command chair on the bridge of the U.S.S. Enterprise, in deep shadow and with no other crew members around, and he’s narrating his Captain’s Log which suggests that this is the final log entry to go with the final, deadly mission of the ship. A figure approaches, with a weapon to Kirk’s head, asking if Kirk is ‘ready.’

We then fall into a flashback in which the Enterprise receives a distress call from Tholians and a landing party goes to render assistance.

And, after a little bit of action, we are ‘to be continued…’.

This very brief beginning of a story is a little frustrating and is one of the reasons that waiting for a graphic novel to put the entire story together in one book is worth the wait.

I found the story interesting, and I’d like to read the rest of it, though the doom of the opening pages is not as ominous as it intends to be if we are to believe this is part of actual Star Trek universe since we know Kirk and crew survive long enough to make a few movies.

The artwork is quite good (though I would have to admit to a bias for the Star Trek art by Gordon Purcell in the 1980-90’s) with coloring that is bold and striking (just look at that cover!).

Looking for a good book? Star Trek: Year Five #1 is well scripted and very nicely drawn comic, but it might be better to just wait for the complete story in a graphic novel format.