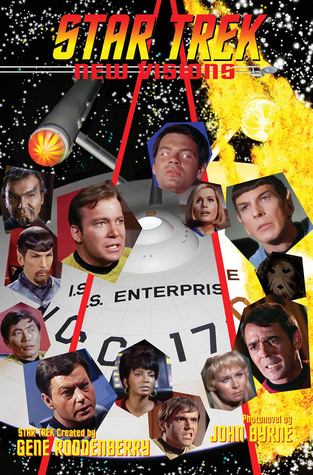 I want to know why it took so long for someone to actually do this!

Author, artist, photo-manipulator John Byrne writes in his introduction that he wanted to create new Star Trek stories by editing existing clips of the episodes together. I’ve had the same thought! And then when he saw the Star Trek photonovels he thought about creating Star Trek stories in this same fashion … use photos from a variety of episodes, in sequential fashion, to tell new stories.  I’d had that same thought!  But Byrne, being a well-known and well-respected figure in the comic book industry, definitely had an advantage.  When he went o talk to a comic publisher, people listened (not that I ever tried).

Byrne also writes about how much work it was, matching light sources and relative sizes within each panel.  Ah…this is why it took so long for someone to actually do this.

The fun here is mostly in seeing what Byrne manages to do with the characters and how he puts them together to tell a story. He’s also an accomplished comic book writer and, being a fan of Star Trek, he puts together some clever Star Trek stories that easily could have been pulled from the 1960’s series.

The only downside here is that by relying on the the existing screenshots, we’re pretty much tied to telling stories with the existing guest stars, and Byrne does just that. He tells new stories with familiar guests and incidents.  We travel to the Mirror universe, and we remember Gary Mitchell and Elizabeth Dehner. I wasn’t thrilled to get ‘new visions’ of them, but I still appreciated Byrne’s work, both as writer and the artistic effort of filling in the scenes.

In this volume we have the following stories:

“Strange New Worlds” – a new story with Gary Mitchell
“The Mirror, Cracked” – the alternate universe Spock pays the Enterprise a visit to warn them that alternate universe Kirk has traveled between timelines and has struck a deal with the Klingons
“Time’s Echo” – a unique story, and Byrne gets quite creative, creating new locations and characters
“Sweet Sorrow” – this was a very short but sweet story in which the women of Star Trek, led by Yeoman Rand, get to have their moment

Looking for a good book? Star Trek: New Visions is a photo-montage graphic novel with stories and photo arrangements by John Byrne. It’s a fun trip and great to see the well-known characters in new adventures.