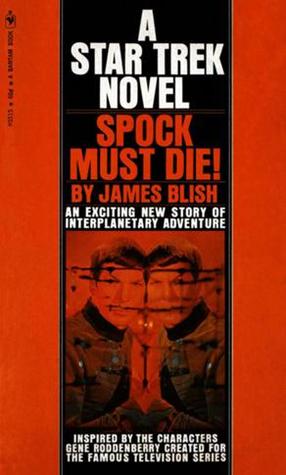 Going mostly off of my own memories, this was the first, professionally published Star Trek story/novel. Fan magazines (fanzines) were already being produced, but with James Blish’s Spock Must Die!, fans everywhere could finally buy a brand new Star Trek story! By a professional!  We were already familiar with Blish through his adaptations of the episodes, so we ‘knew’ that he knew these characters.  And of course the success of this has prompted an entire publishing line of Star Trek novels.

I read this when it first came out (1970?) and really enjoyed it back then – mostly just to experience an entirely new story of my favorite tv characters.  It is quite likely that at that time I had not seen every episode of the show.  I would have been watching this in syndication and catching it as I could.  Reading again now, I find it much less satisfying.

The idea of a transporter malfunction causing a duplicate Spock seems too easy a plot contrivance. Now, anyway.  It feels like Blish took an early episode (The Enemy Within), changed the main character from Kirk to Spock, and tried to tie in the Organians from another first season episode (Errand of Mercy) to give the readers something ‘new.’ But the characters don’t talk or behave the way we expect them to.

I would have been better off not re-reading this, so I could enjoy the memory of liking the book.

Looking for a good book? Spock Must Die! by James Blish has a place in the early Star Trek legend history, but as a Star Trek novel … there are better books out there.