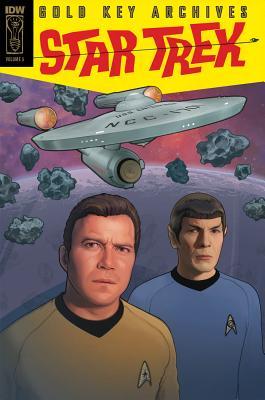 This fifth volume from publisher IDW, reprinting the Star Trek Gold Key comics, finishes off the collection.  As mentioned at the end, a few of the later issues of the comic were reprints themselves and IDW didn’t reprint the reprints.

My first reaction is with the art and how it got better and worse at the same time.  There is finally some recognition of what things actually look like on the show – the ship doesn’t emit jet fuel plumes, the uniforms bear patches and rank braids, etc.  And characters a often resembling themselves a little bit more.  On the other hand, the art is simpler and not so detailed and fantastic … and Uhura is Caucasian!

The stories have been … well … pretty much like all the stories – mostly a little bizarre.  Here we have:

“Dwarf Planet” – in which Kirk is attacked by some mighty small planet inhabitants.  Even the art here looks like many of the panels were drawn from Gulliver’s travels movie stills! But when the shrinking rays strike the ship, Scotty become the incredible shrinking man.

“The Perfect Dream” – Kirk and his crew are facing a board of inquiry after a planet the recently visited blew up. But there was something strange going on with that planet. The inhabitants were Asian-appearing humanoids – but they all looked alike. Yikes!

“Ice Journey” – The Enterprise crew visit a planet with two warring factions.  Kirk needs to get them to work together because their planet is soon going to explode.

“The Mimicking Menace” – Life signs on an asteroid prompt Kirk to take a landing party to investigate.  It turns out that a life form that feeds on energy has lured them in. But with their energy draining, how will they get away?

“Death of a Star” – a very old being is discovered on a planet in a system where the star is soon going to explode. She claims to be the god Isis, which Kirk doubts, but when she flings the ship to safety as the star explodes, there is some temptation to believe in the old god.

“The Final Truth” – Kirk and his landing party are taken prisoner by the locals and now wear slave collars around their necks. The man working behind the scenes is none other than Admiral Khan. But would a Starfleet Admiral behave this was unless he was under some other influence?

I had a lot of fun reading this entire series. As a long time Star Trek fan, and one who saw these comics when they first came out, this brought about a sense of nostalgia. We were hungry for more Star Trek stories back then.  We couldn’t just watch a show any time we wanted, so comics like these – with all the myriad of faults – were enjoyed just because we could continue some form of Star Trek. It may not seem like it now, with so many different things available to the consumer, but we were delighted with what we could get … even if it wasn’t particularly well done.

Looking for a good book? Star Trek: Gold Key Archives: Volume 5 is a graphic novel reprinting the last of the old Gold Key Star Trek comics.  They don’t hold up to what we can do in regards to new Star Trek stories today, but was enjoyed for what it was some 50 years ago ow.