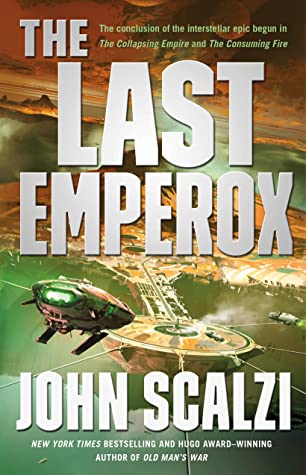 In this conclusion to The Interdependency trilogy, author John Scalzi heats up the action and ties up the nicely, albeit unexpectedly.

‘The Flow’ is a slipstream in space that connects distant worlds/communities known as ‘The Interdependency.’ The Interdependency has one ruler, referred to as the Emperox (a non-gender version of emperor).  . The current emperox was not expecting to gain the title. Her father died and her brother was killed, thrusting her to rule over the entire Interdependency.  She took the name of Grayland II as her emperox name (she was Cardenia Wu-Patrick before becoming the emperox). Fortunately for her, she can seek guidance from every other emperox before her.  A special room (the Memory Room) allows for her to call upong any past emperox and a computer generated image appears, complete with mannerisms and all the knowledge of what that emperox thought or did.  Recordings are made of Grayland II every moment so that once she passes on she will also be able to impart knowledge to the next emperox.

And she may just ‘pass on’ sooner rather than later.  One of the biggest drawbacks to becoming emperox is that assassination attempts are pretty common.  Even more so when you were not the expected emperox and the leader of another house, Nadashe Nohamapetan, who has tremendous political clout and power, thinks that she should be the emperox.

Working alongside Grayland is Lady Kiva Lagos – a no-nonsense, full of action woman who may have just a touch of coprolalia or Tourettes – and Marce Claremont. The latter, a brilliant flow scientist, is Cardenia’s lover. He is also the person who has brought awareness to Grayland II and the Interdependency, that the flow streams are collapsing and that soon each planet or station will be cut off from all the others.  This bodes doom for a collective that relies on the trade between worlds.

Grayland’s council of house leaders don’t seem to want to believe in Marce’s science, while at the same time they begin planning for the safety of themselves and their families with little concern for the people they govern, which is why Grayland II sees it as her duty to find a way to save the entire Interdependency … while fending off assassination attempts, of course.

Scalzi’s one of the best when it comes to adventurous space opera and this book definitely thrills, while wrapping up the story quite nicely.  There is a surprise or two along the way, and a few things that are not at all surprises but that you really wanted to see happen.

It’s hard to say too much without giving anything away, and making the discovery is definitely part of the fun here. Though there is a major plot that happens and I haven’t decided yet if I’m a little ticked off that we didn’t get any clues about the possibility of it happening until this third book, or if there was a clue about this right under our noses from the very beginning and we just didn’t see it coming.

If you happen to follow Scalzi at all, on any of his social media platforms, you’ll know he tends to get political, and the political parallels in this book aren’t particularly subtle. If he was looking for a theme for this series, he found it with American politics of the last four years (though Scalzi’s leader is antithetical to the U.S. leader).

I’ve already personally recommended the first two books in the series to a few people, and I would recommend this one as well.  But you really will want to have read the whole series, so don’t start here … end here.

Looking for a good book? The Last Emperox by John Scalzi is a thrilling space opera adventure that nicely finishes of The Interdependency series.  Read all three books.