FURY FROM THE TOMB – S.A. Sidor 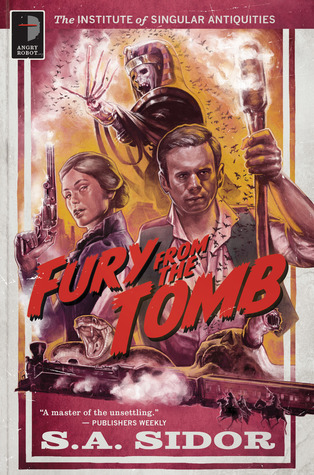 Romulus Hardy is an academic Egyptologist and now, in 1888, he has made a discovery that could shock the world and give him some great academic recognition.  He has found a tomb in Egypt with five undisturbed coffins and a very large sarcophagus. Retrieving these, however, seems dangerous as all on the expedition but Romulus die horribly.

Romulus manages to get his items to the United States, but while on the train to his recluse backer, the train is hijacked and Romulus and an odd assortment of others must track down his stolen goods, now in Mexico.  But the goods themselves have other ideas.  Now released from their cursed imprisonment, the mummies, led by Amun Odji-Kek, Sorcerer of Set. It will be no small feat for Hardy to just survive his encounter with Kek, much less restore order.

I had a lot of fun with this.  It reads like classic pulp fiction. There’s a bit of Lovecraft style here with Romulus going on and on, telling us what is happening and how he’s feeling about things, but then there is more action, as though it were combined with some better B-grade horror movie.

I know that the popularity of horror ‘monsters’ ebbs and flows.  Vampires will be the hot things, then zombies or other forms of the ‘undead’ will be big.  I haven’t stayed very current with horror pop culture, but I wonder if this is a sign that evil/cursed mummies will be the next wave of horror creatures.  I had seen evidence that dark mermaids or other evil sea creatures were popping up in books, but they’ve waned a bit.

It’s nearly impossible to not make any comparisons to Indiana Jones here.  We’ve got an academic going to the desert to unearth some ancient artifacts.  How do you NOT think of Indiana Jones unless you are under twenty and haven’t been exposed to the films?  But the comparison only lasted for a chapter or two, and then the darker aspects took over.

This isn’t the sort of book you take too seriously.  It’s guilty fun while it lasts.  I can’t imagine I’ll think back on it too much, but I enjoyed it.

Looking for a good book? Fury from the Tomb by S.A. Sidor is fun horror fiction, complete with evil mummies and curses.

Fury From The Tomb

series: The Institute for Singular Antiquities #1