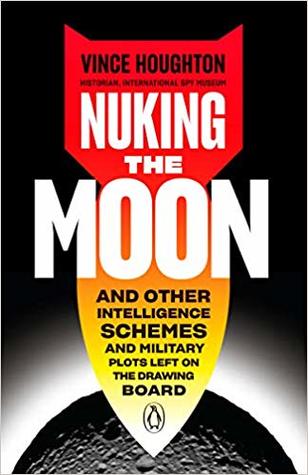 Whether it’s the CIA’s plan to implant live cats with listening devices and releasing those cats in Russia (because, well, top-level Russian figures just love to have stray cats sit on their laps while they discuss their plans to conquer America, right?) or actually detonating a nuclear bomb on the moon (because, ah, because the Russians were reportedly planning to do it, so we needed to do it too, and the resulting mushroom cloud would be impressive, right? Um…no.  You actually need an atmosphere to form a mushroom cloud) author Vince Houghton has pulled together a delicious collection of wacky ideas from the government archives that have been declassified.

On the surface, most of these ideas seem reasonable (okay … maybe not sending cats as spies). I mean, I can see the government brain-trust sitting around coming up with ideas that are off-the-wall because they hoped no one else would suspect them for being anything other than what they appear to be.  But … where this book is most interesting is that we would like to believe that people are smart enough to recognize a stupid idea and not actually spend the time and money on a stupid idea.

One of my favorites was the idea, repeatedly tested!, was the idea of attaching bombs to the backs of bats. The man behind the idea was convinced his idea was still better than what the government eventually went with (dropping nuclear bombs on Japan) and would have brought about an end to the war with fewer civilian deaths.

There are quite a few ridiculous ideas here and Houghton’s writing style is easy, relaxed, and quite personable, addressing the reader directly and making some fun, snide, sarcastic remarks along the way.

This isn’t really the sort of book one just sits and reads from cover to cover (though you could). Each chapter is its own story segment and so for me it’s the sort of book I would pick up between novels and read a chapter or two. Or perhaps as a bathroom reader. However you read this, it’s a lot of stupid fun.

Oh…and one of the brains behind nuking the moon?  Someone most of us will recognize as a very brilliant man.

Looking for a good book? Nuking the Moon by Vince Houghton is a delicious look at brilliant stupidity.

Nuking the Moon: And Other Intelligence Schemes and Military Plots Left on the Drawing Board