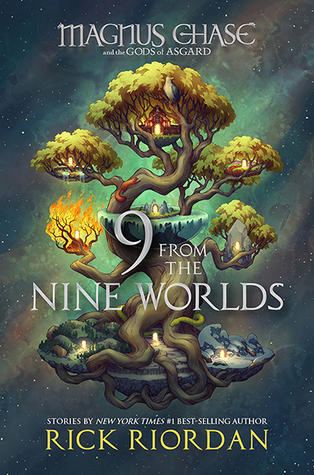 How do you appeal to the younger (late elementary/middle school) readers?  You give them a popular series with some recognizable characters and you add some crude humor (“Thor was letting out farts like a sputtering engine.”).

This book is nine short stories told from the point of view of different characters.  We start with Asgard: Home of the Aesir -“Just Another Decapitated Head” by Odin.  The others are:

Midgard: Home of Humans – “This Is Why I Hate Clothes Shopping” by Amir Fadlan
Nidavellir: Home of the Dwarves – “This little Light of Mine, I’m Going to Let It Shine” by Blitzen
Alfheim: Home of the Light Elves – “Speaking of Trolls…” by Hearthstone
Jotunheim: Home of the Giants – “Nice Doggy” by Thomas “T.J.” Jefferson
Niflheim” World of Ice, Fog, and Mist – “So’s Your Face!” by Mallory Keen
Vanaheim: Home of the Vanir – “Well, That Was a Surprise” by Halfborn Gunderson
Muspellheim: Home of the Fire Giants and Demons – “I Play with Fire” by Alex Fierro

I’ve enjoyed a number of Riordan books (including the first Magnus Chase book) and he definitely continues his strong sense of character here.  He also manages to maintain a sense of playfulness – just look at the titles of those stories! – that will delight the target audience. And what is this target audience?  The same youngsters who relish Captain Underpants.

If you are planning to read this because it’s a Magnus Chase book – please look it over carefully.  It isn’t really a Magnus Chase book in the sense that we have Magnus interacting with the Nordic gods.  Instead we have a few gods telling stories. This could be very disappointing to a few dedicated Riordan readers but I suspect it will garner a new audience, which is what is likely intended.

I personally wasn’t a big fan of these stories, but if youngsters came into my library and asking for recommendations, I can see this being a popular choice.

Looking for a good book? 9 from the Nine Worlds by Rick Riordan is part of the Magnus Chase and the Gods of Asgard collection of books, but the target audience here is a bit younger the those who read the 500 page books.

series: Magnus Chase and the gods of Asgard