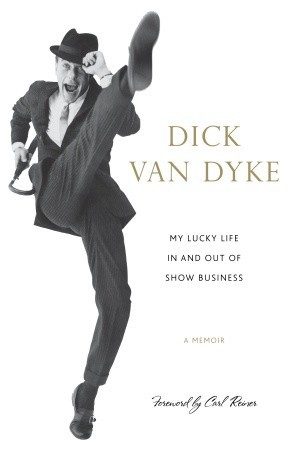 There aren’t very many performers/actors that I admire as much as I do Dick Van Dyke. I grew up watching this man.  On television it was The Dick Van Dyke Show and then The New Dick Van Dyke Show.  On the big screen it was Mary Poppins and Chitty Chitty Bang Bang.  His talent, to me, was about as big as it could possibly get. And so I really looked forward to this autobiography.

Van Dyke doesn’t shy away from some of the troubles he had though his career – his battle with alcoholism was moderately well-known – and he doesn’t get maudlin about it.

I don’t know how much of Dick Van Dyke’s life a career were known before, but, not being much of a Hollywood industry follower myself, a fair amount of what Van Dyke writes is news to me.  His start on The Dick Van Dyke Show and how it came to be named after him was fascinating.

While I don’t mind a Hollywood book that isn’t a ‘tell-all’ sleazy style of book, Van Dyke goes almost too far in the other direction.  He certainly preserves his image as a clean-cut guy (like a real Rob Petrie or a real Dr. Mark Sloan) who has had some struggles. But he also comes across as a bit of a Pollyanna – wide-eyed and innocent to the darker side of Hollywood.

It is nice to see that there are still ‘good’ people in Hollywood, with a strong moral ethic.  I have to say, though, that sometimes it felt as though Van Dyke underplayed a few things in his past in order to keep his image clean.  While he admits to some marital strife and a divorce and remarrying, he mentions but glosses over the fact that he had an extra-marital affair.  He’s not quite the clean-cut angel he would like to be.

This certainly didn’t do anything to dispel my notion of Dick Van Dyke as being one of the few performers I admire. He’s a heck of a talent and by all accounts, a heck of a nice guy to boot.

As a side note, though I’m sure he wouldn’t ever remember it, I met Mr. Van Dyke (sort of).  I was a mail-room employee of an entertainment company some thirty years ago.  I saw him sitting in the lobby of the company, waiting for a meeting with one of the producers.  Though I saw and met a lot of well-known actors come through the doors, this was Dick Van Dyke, and I was willing to risk my job and I walked over, extended my hand, which he took and shook, and I said, “Mr. Van Dyke, I just wanted to say thank you for all the wonderful years of entertainment you brought to me.” (I didn’t get fired, and I don’t think anyone knew I did it except for the receptionist (a friend) and my buddies in the mailroom.  But I’ll repeat it now:

Mr. Van Dyke, I just wanted to say thank you for all the wonderful years of entertainment you brought to me … and now to my children as well.

Looking for a good book? My Lucky Life in and Out of Show Business is an autobiography by Dick Van Dyke that reads a little passively and perhaps a little too idealized from the authors point of view, but is informative and provides some insight to a nice guy we’ve almost all seen and loved.

My Lucky Life in and Out of Show Business