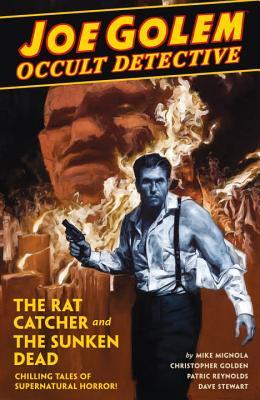 At some point in our future, parts of Manhattan become submerged in thirty feet of ocean water. Forty years after the disaster this area, now known as The Drowning City, has a new problem … an unknown creature is rising from the dark waters and snatching children and taking them into the water. Joe Golem is a tough detective of the school of hard knocks who keeps his wits about him even when things are most dire. If anyone can find out who or what the creature is and rescue any children that might still be alive, it’s Joe.

But Joe is haunted by unusual dreams of a medieval witch hunt in Europe – dreams that sometimes feel more like ancient memories.  Joe’s mentor, who guides him and assists him from the sidelines, encourages Joe not to waste time worrying about those dreams, but he seems to know more than he’s letting on.

Authors Mike Mignola and Christopher Golden are both known names in the comic/graphic novel community and both are strong story-tellers which is evident here as they weave in the back story/dreams along with the current mystery that our hero is working on. The stories themselves “The Rat Catcher” and “The Sunken Dead” are both captivating stories and well written for this medium.

Joe Golem appears to be a cross between Sam Spade and Doc Savage – a tough, smart, creative man working in a very dark, noir world. It definitely appeals to the geek in me.

The art by Patric Reynolds works.  It is not the best art I’ve seen in a graphic novel, but it captures the noir mood and we don’t strain to make out what’s happening on each page or in each panel.  It helped to tell the story.

I knew nothing about this when I requested the book – I wasn’t even aware that it was by Mignola, the creator of Hellboy – but I was immediately pulled into the story and given strong characters in a world I want to know more about.  That makes this a winner.

Looking for a good book? The graphic novel Joe Golem: Occult Detective, Vol. 1 is a sci-fi noir mystery that really engages the reader and will have you eagerly anticipating the next volume.