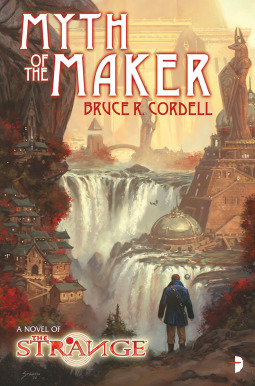 Carter Morrison is a software developer/programmer and he and his associates have built a fully immersive Virtual Reality world that should take the gaming world by storm. But something goes awry at Carter kills his friends in order to save mankind.  Well…maybe.  When Katherine Manners finds a man in the computer server room who looked to be materializing as if from a 3D printer and then liquefies, leaving only a ring and a USB flash drive in front of her, worlds collide.

Jason Cole, one of those who was killed by Morrison returns with a frightening tale of the reality of the VR world that isn’t so much ‘virtual’ as it is ‘alternative’ and that those ‘killed’ by Cameron actually were sent to the VR world and that a link between the worlds is making itself known and a malevolent presence in the VR world is making a run to dominate Earth.

Author Bruce Cordell knows the gaming world – being a game designer himself – and the idea of creating stories inside a game world is certainly nothing new.  Cordell himself has written a few books based on games.

Books based on video games or RPG’s may have a small built-in audience with those who are already familiar with the same or at least with the game parameters.  For the rest of us, we need to be brought in to the story with compelling characters, conflict, and creative story-telling.  Here we only get a little of what we need to be invested in the story.

The characters are not so compelling but feel pretty cardboard-like. There really is no one that we rally behind and cheer on – Katherine was the closest to being rally-worthy.

And as for compelling story-telling…. Cordell starts us off with a slough of technical computer science talk that really isn’t important to us or the story at all.  It’s just setting up a character or two and it definitely doesn’t make us like anyone any more or less just because we get they are super intelligent when it comes to programming.

I’ve never been interested in books based on gaming and this hasn’t changed my feelings in that regard.

Looking for a good book? Myth of the Maker is a novel based on a computer game series by Bruce R. Cordell and if you enjoy gaming novels, you may find this worthwhile. Otherwise it is quite limited.

Myth of the Maker (A novel of The Strange)