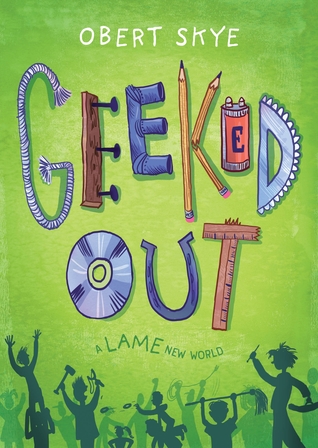 The world is crumbling apart after bombs have nearly destroyed humanity, but that doesn’t mean kids get a pass from going to school!  Uh uh, not way! It’s just that school isn’t quite the way it used to be.  Sure, there’s still a hierarchy of cliques, with the jocks at the top of the heap and the geeks at the bottom, but in order for the students to get supplies they must compete in athletic games for the honor of opening the air-dropped pack of supplies.

The doors and windows to the school are all boarded up, so students must enter through a bombed-out hole in the side of the building. The school’s principal is constantly in hiding and the school is run by the evil Darth Susan – the school secretary – who encourages anarchy and hopes that the students are stupid enough to NOT pass the state mandated tests (for reasons that come out much later).

But while the geeks can’t compete in games of athletic prowess, they use their brains to combat the jocks and Darth Susan.  But while in hiding after being chased by most of the school, the geeks find an old can of food, but when they stick their hands in to have a taste, they are covered in spiders – those spiders appear to give the four geeks super powers and they form a gang: League of Average and Mediocre Entities (or LAME).

There certainly will be an audience for this sort of book.  Those same students who loved Captain Underpants or Diary of a Wimp or any of those middle school books in which the underdog (the geeks) gets to win will likely enjoy this.  But this world is a very dark, ominous world no matter how light author Obert Skye tries to make it with the requisite humor.  After all, we have a principal who isn’t just a coward … he’s scared (for his life, presumably).  We have nightly curfew where it isn’t safe to be outside after hours. A world where food is hard to come by and schools treat supplies as trophy commodities in order to pit students against one another.

The humor (such as the acronym LAME) is quite forced and very few things are delightfully funny.

I like a lot of dystopian fiction but there’s something just a little too dark underneath this goofy story which would keep me from recommending it.  If a youngster were to pull it off a shelf and read it, great. For those who like it? Great.  It’s just not something that will appeal to the average reader.

Looking for a good book?  Geeked Out by Obert Skye is a middle school humor book with a very dark undertone that will prevent it from having mass appeal.