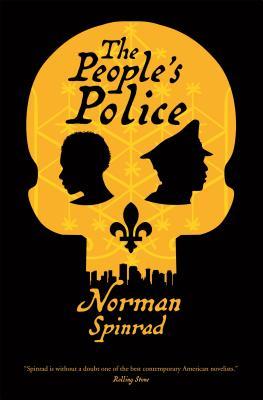 I have really mixed feelings about this book. On the one hand it’s gritty and very real feeling, with oddball characters and a dark, Disney-esque New Orleans.  On the other hand, it’s very political, with characters that don’t appeal or reach out to me.

I haven’t read many books set in the New Orleans area and I’ve never been to Louisiana, but I recognize the unique characteristics of the community and author Norman Spinrad does a really great job of using the city as a character without making it a cheap stereotype of the sort one might find in film or television. It repeatedly struck me that Spinrad really seems to know New Orleans.

Other than the city, our central character is Martin Luther Martin – a tough cop who worked his way up from the ‘Alligator Swamp’ (a gangland area) and tries to do mostly right and serve well as a cop.  But he’s given an order which he has trouble following.  He is asked to serve some eviction notices and to remove people from their homes (technically not ‘theirs’ any more).  But one of the names on his list is … himself.

Martin argues against evicting himself and evicting all the good people he knows based on the greed of the banks.  When his pleas fall on deaf ears, Martin organizes a police strike and spearheads a campaign to elect a new governor.  He works  with the brothel owner, J. B. Lafitte, whose business is being foreclosed upon.  It seems that the big businesses and banks have no compassion for those who lost so much from the recent hurricanes. Martin and Lafitte convince the local Voodoo queen, Mama Legba (otherwise known as MaryLou Boudreaux) to be their candidate for governor.  Mama Legba isn’t your average Voodoo witch – the spirits really DO speak through her, giving her the appearance of a multiple personality disorder. No one is sure which personality will show up when they are out campaigning which leads them to believe that their chance at getting in to power and making some sweeping changes, is a long shot.

There was a lot of fun here and the characters were among the most unique as I’ve read. I felt shades of Richard Hooker, and even a bit of Joseph Heller’s Catch-22 here. But it’s still a book with politics at its core, and whether I agree with Spinrad’s views or not, I don’t like politics in my fiction – not politics that are too close to real – and so that took some of the enjoyment from this read for me.

Looking for a good book? The People’s Police, by Norman Spinrad, is a political satire that captures the spirit of the Big Easy and presents wonderful characters that you won’t forget.