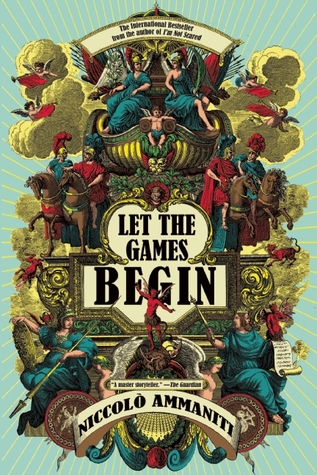 Writing humor/satire is difficult.  Black humor can be even trickier to make sure that the reader is understanding that it’s humor, and dark.  The fact that Niccolò Ammaniti is being translated probably isn’t helping him at all.  But bottom line – I found nothing redeeming in this book at all.

According to the Goodreads description, the book “fuses a riotous dose of anarchic absurdity with a clear-eyed critique of contemporary society caught in a narcissistic spiral of longing and striving.” Ummm.  If I had read that first I wouldn’t have even bothered trying to read the book in the first place.

There’s a party in the works, for the biggest names of the biggest name celebrities.  It is show-off time and everyone will want to be there in order to prove to everyone else that they are the top celebrities.  And it will be a chance for people to show off a bit and to rub elbows with those who are higher up the celebrity scale.

One party-goer, Fabrizio Ciba, is a celebrity writer.  He’s struggling to write his next book, likely to be a hit just based on his name.  But he can’t get his work to flow and that tends to prompt him to being a little more neurotic than usual.  In his plans to attend this major soirée Ciba encounters a satanic group who plans to crash the party and bring society’s upper crust down.

I suspect that a large part of my disorient here is a basic cultural difference.  I could not identify with anyone in the book. If we’re satirizing something, it works much better if I’m familiar with those being satirized.   Nothing about these people strike me as the elite society/upper crust.  These people are all buffoons – stereotypes that aren’t even particularly strong stereotypes.

And of course there is plenty of sex among the heathen elite.  But the leader of the Satanic cult raping women – who enjoy it! – is really off-putting.

I don’t recommend this book unless you are already a huge fan of the author in which case, well, maybe you’ll like this one, too.

Looking for a good book?  Maybe it’s the cultural difference?  Maybe it’s the translation?  But Let the Games Begin by Niccolò Ammaniti is a struggle to read and even more difficult to enjoy.