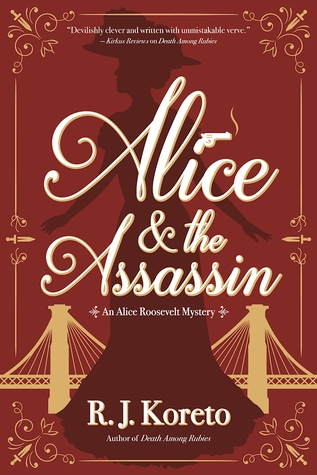 President Theodore Roosevelt reportedly once said, “I can either run the country or I can attend to Alice, but I cannot possibly do both” in regards to his daughter and history has painted her as a bit rebellious and rambunctious. Author R.J. Koreto also paints her as curious in the mystery, Alice and the Assassin.

It is 1902 and Teddy Roosevelt is President of the United States.  Teddy assigns Joseph St. Clair – a veteran of the Secret Service and former Rough Rider – the task of watching over Alice, the President’s daughter. She smokes cigarettes, bets on horse races, chews bubble gum, and generally challenges her guard at every turn.  She also develops a real school-girl crush on the rough, older St. Clair.

St. Clair doesn’t do much here except that we see Alice through his eyes.  He doesn’t try very hard to stop her from whatever she gets in to, but instead just tries to make sure she is safe – whatever she is doing.  That’s harder than it sounds, however, since Alice gets the idea to investigate the assassination of President William McKinley.  In part, she’s hoping to protect her father whom she believes could meet the same fate if the true culprits aren’t uncovered. In part, it’s something to do. St. Clair helps open a few doors for the young woman and protects her from physical danger.

Koreto has taken an interesting historical figure and written a complicated mystery.  The plot intrigue, complete with foreign powers trying to create some influence in the United States reads an awful lot like some of the political goings-on happening in the U.S. today, which adds to the intrigue.

But despite the historical research and the fascinating characters, the book moves along at a snail’s pace.  We expect that a book in which this young, vibrant woman at the turn of the century who bucks the trend at every turn, would move along quickly – at her pace.  But because the book is told from the point of view of the older, more careful St. Clair, we get it at his pace – careful, watchful. It’s a frustrating way to read … wanting to go faster than the author.

I’ll be interested in the next volume, but if the pace continues slowly and methodically, it will be my last.

Looking for a good book?  Alice and the Assassin by R. J. Koreto is a historical fiction mystery that moves a little too slowly but shows some promise for future books.

Alice and the Assassin