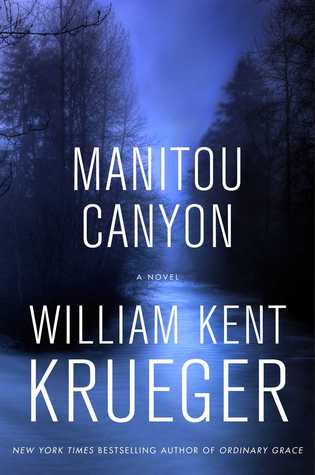 Manitou Canyon is the 15th book in the Cork O’Connor mystery series. You don’t get to fifteen books in a series if there isn’t something engaging and powerful about the characters and/or the stories.

I’ve only previously read the first two books in the series – just enough to give me a taste of the central characters.  Certainly much has happened in the twelve books in between, but I never felt that I was so lost that I couldn’t follow this story. My wife, who has read all the Cork O’Connor books, was sure I’d be really confused, but the nice thing about this series is that you really can pick up any book in the series and get a complete story.  The characters may grow during the course of the series, but the central stories are contained in each volume.

In Manitou Canyon, former cop Cork O’Connor, who now lives in Northern Minnesota, has helped the local law enforcement search for a man who went missing in the Boundary Waters.  The man, a wealthy developer was an old friend of Cork’s, and disappeared while spending time in the Boundary Waters with his two grandchildren.  When the search is finally called off, the grandchildren hire Cork to search on his own.  The grand-daughter, an outdoors person herself, accompanies Cork while the grand-son stays in town.  But within a day of the search, the grand-daughter also goes missing, and then Cork is kidnapped and those in town only know that Cork has failed to check in as agreed.

What follows is a story of survival in the wilderness, a stand by a group of people to fight for what’s ‘right,’ and a moral battle – both for individuals and for a group of peoples.  It was an exciting, thrilling ride and a tightly woven, complex mystery.  The fact that the mystery revolves around a few individuals fighting each other and the land around them, but also has broader, national implications makes this a really exciting story.

I will add, though, that it seemed really obvious to me who was involved in the kidnapping, despite Krueger’s attempt to keep the person out of the limelight.  What I didn’t know was ‘why’ until others in the story managed to catch on and investigate.  This is typically my problem with the mystery genre – I tend to know ‘who’ before the characters in the book.

All in all, a really thrilling read set in a beautiful natural environment.

Looking for a good book? Manitou Canyon by William Kent Krueger is the 15th Cork O’Connor book though it can be read as a stand-alone mystery.  It is full of adventure, mystery, and intrigue in a wonderful, beautiful environment and well worth reading.