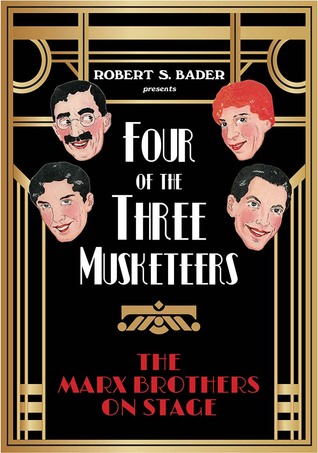 Robert S. Bader has done an incredible amount of research into the early days – the vaudeville and live stage performance days – of the Marx Brothers and shares it with the rest of us in the tremendous book, Four of the Three Musketeers.

Bader brings us in to the home of Minnie and Sam Marx, introducing us to the extended family, and we only leave when Minnie and the boys begin their careers in show business.  We get the very definite impression that Minnie was quite the caretaker of these early careers and became an agent for them  and truly looked out for their best interests (even if it back-fired a time or two).

We get a very detailed look at the vaudeville careers of these comedians as well as their more personal lives in the early days (with the vaudeville schedule being what it was, the two [business and personal lives] were intrinsically linked.  That Minnie created a ‘stable’ of young starlets, ready to join the boys in a show at a moments notice – knowing full well that these young ladies did more than simply perform on stage to service the brothers – speaks to Minnie’s manipulation and desire to provide for her sons in every way.

There have been plenty of books on the Marx Brothers, and the brothers themselves have written a few volumes on their early days.  But what Bader does extremely well is point out to the reader the inconsistencies in the stories, the facts Bader has found, based on research, and – when no facts exist – relays the various points of view and expresses thoughtful consideration on what is most likely the ‘truth.’  It all comes down to Bader’s impressive research.

From their early battles with vaudeville circuit owners (and their being blacklisted from the top producer) and Chico’s gambling debts, and young women scorned, to Uncle Sam’s draft and Broadway and eventually film, we following the three … er four … um, sometimes five Marx Brothers through their entire early career.

Bader is extremely easy to read, making these 500+ pages go by quite easily.

And as impressive as the narrative itself is, “The Marx Brothers Stage Chronology, 1905-45” has Bader compiling every live performance theses comic geniuses gave over a forty-year span, listed the theatre, the city, the date, and even the sketch/revue/show name when possible.  I may have enjoyed reading through this nearly as much as the narrative as I followed the path they took, could visualize some of the cities and thought about visiting some of these locations (some near me).

I grew up watching the Marx Brothers films – classics replayed in movie theatres (so long before Netflix or DVDs) – and have read up on them periodically through the years, and this is easily the most comprehensive, readable, and thoroughly-researched book I’ve come across.  It is highly recommended.

Looking for a good book? Four of the Three Musketeers, by Robert S. Bader is a remarkable achievement, detailing the early years of the famous Marx Brothers, separating fact from common fiction (usually invented by a Marx Brother as a joke), and mapping out every theatre and sketch they performed during the early days.  It is highly recommended.

Four of the Three Musketeers: The Marx Brothers on Stage