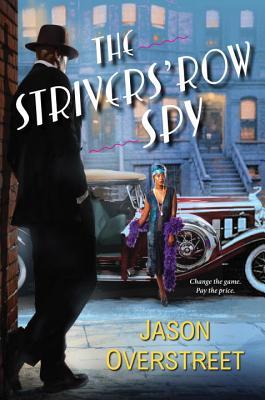 The Strivers’ Row Spy is the debut novel for author Jason Overstreet and is a hit from page one all the way to the end.

Sidney Temple is one of the first black men to graduate from Middlebury College in 1919 and he’s driven to make sure that the sacrifices his mother made in order for him to go to school will be repaid.  His accomplishment at graduating college, along with his war service brings him to the attention of J. Edgar Hoover who recruits Temple as one of the first blacks to be a spy in Hoover’s Bureau of Investigations.

Temple is set up in Harlem by Hoover’s Bureau.  Temple’s assignment…? Get close to, and find evidence of corruption or illegal activities of Marcus Garvey – a radical, black, ‘back-to–Africa’ extremist.

Sidney does make it into the inside of Garvey’s massive and extremely protective empire, but Temple manages to play it close to the vest and keeps his eyes open for other opportunities.  While he disagrees with Garvey’s vision, he’s not convinced that Hoover has the best interest of America’s blacks in mind.  And so Sidney anonymously passes along highly sensitive information to W.E.B. DuBois who is organizing the NAACP.

Author Jason Overstreet has written a highly compelling spy mystery with an authentic presentation of history of the period, capturing the exciting social extremes of the times.  Just when everything seems to be going Sidney’s way, and perhaps just as the reader is forgetting that our protagonist is a black man in the 1920-30’s, we get a stinging reminder of the racism that once (and still) oozes through our country.

Overstreet moves the story along beautifully, creating high interest in the story and giving the reader a strong desire to know what happens next.

I’ve written before that I much prefer character-driven stories and here Overstreet excels.  Sidney Temple is absolutely fascinating.  I believe in him, I believe that I understand him, and I trust him to do just what I would do given the circumstances.

The last ten percent of the book is as exciting a thriller as any James Patterson or Lee Child or …well, you name the author and Jason Overstreet can stand shoulder-to-shoulder with him/her.

If there’s one portion of the book that doesn’t live up to the rest – and keeps this from getting an even five stars – it would be the scenes with Temple’s wife.  I can understand the need to have Sidney be a married man at times, and I can understand why she needs to be out of the way at other times, but the few moments when the story is on the two of them I really just wanted to get back to Temple’s undercover work.  And the dramatic scene between the two of them came out of nowhere for me and felt like simply a device for some necessary action later in the book, rather than organic character development.

Still, this is a very well written historical thriller and I’m looking forward to Jason Overstreet’s next book.

Looking for a good book? The Strivers’ Row Spy by Jason Overstreet is a political, historical thriller that is tremendously compelling and highly recommended.