I AM THE WEAPON – Allen Zadoff 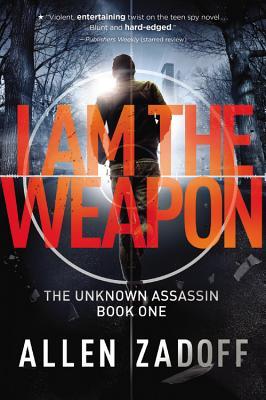 This is one of the most exciting, involving books I have read in a long time.

A sixteen year old boy is a trained assassin.  He was found and brought in to the ‘company’ by ‘Mike’ – the assassin who killed the boy’s mother and father.  Now, ‘Mother’ and ‘Father’ and the invisible leaders sending orders to the young man, and presumably others like him, to perform assassinations.

Through a series of codes, he gets his new assignment and is enrolled in a new school, given a new name and he begins to live as ‘Ben’ at a new high school.  Although he doesn’t look like the athletic type, because of his training he’s quick and dangerous and deadly.  And lucky. (As we see when he’s followed by a series of mob killers.)

But on this particular mission, ‘Ben’ is thrown for a loop.  A loop by the name of Sam – short for Samara.

Ben is too professional and too cagey to get caught up in anything resembling a relationship, but Ben IS also a sixteen year old boy and all the training in the world doesn’t trump hormones.

Ben and Sam aren’t a cute couple, by any stretch of the imagination, but both see something in the other that they recognize and respect, even though they maybe can’t quite define it. Sam is the daughter of New York’s mayor and Ben’s next target.

Ben does not kill the mayor when he has the chance and this mission drags out longer than any other he’s been on. ‘Mother’ and ‘Father’ take note and recognize that he may be distracted by a girl and try to take matters into their own hands to keep Ben focused.

Author Allen Zadoff’s writing style is brief and direct.  It fits perfectly with the near-emotionless Ben and his training.  It also makes for very easy reading. Zadoff also knows how to end a chapter, making the reader crave to read on.

Looking for a good book?  Allen Zadoff’s I Am the Weapon is a young adult thriller that is easy and exciting to read and you won’t want to put it down.

I Am the Weapon

One comment on “I AM THE WEAPON – Allen Zadoff”