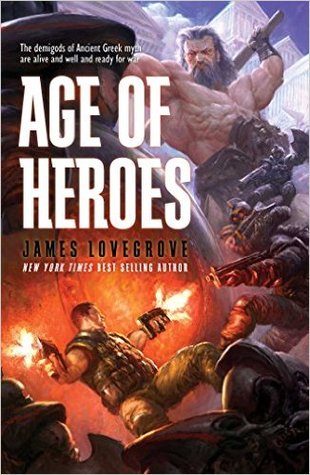 Book #8 in a series?  I wish I had known before I started.  That is one of the problems with Advanced Reader Copies – you just don’t always know when a book is part of a series or not.  I suppose in today’s book market it’s safer to assume a book IS part of a series than not.  And…I could look it up before reading, but I do like to go into each book with an open mind and knowing only what the publisher wants me to know from the information on the cover and the front matter.  And so I end up in the eigth book in a series…

In Age of Heroes, we meet a series of Greek demigods who have hidden themselves among the mortals over the centuries. As demigods, it has been expected that they could never die, but somehow, someone has figured out how to do precisely that … kill demigods.

Theseus has been living in New York and working as a crime fiction writer which prompts his interest in investigating the murders.  The investigation brings him in contact with a lot of his extended family, each of them trying to quietly blend in, but demigods have a very long memory and family squabbles aren’t easily forgotten, making it difficult for Theseus to get the information that might help save the family.

Author James Lovegood does a nice job of weaving an action story using classic Greek heroes who’ve been, essentially, re-booted. The story moves swiftly, with plenty of action, but not a whole lot of substance.  Mostly we get action sequence, followed by clever modernization of demigod, followed by action sequence, and so on.

I’m probably not the only person who will make this obvious connection, but the book reads a lot like an adult version of Percy Jackson.

This was a delightful read for the moments that I was in the story, but it doesn’t make me want to run out and get any of the other books in the series.

Looking for a good book? Age of Heroes by James Lovegood is an action-packed sequence of Greek demigods that will appeal to those who want a more adult version of the Percy Jackson series.