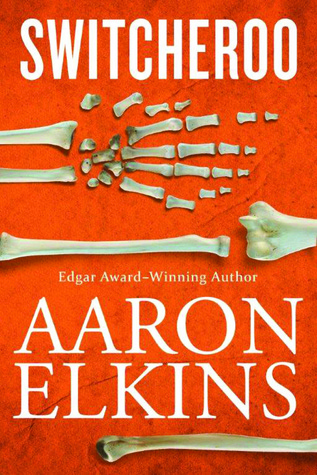 I’ve read one other book by Aaron Elkins and it was a book he co-wrote with his wife (see review here). I had enjoyed it and thought perhaps I might also enjoy his solo work.

I’m relatively new to the mystery genre (I’ll soon have to stop saying that) and I’ve been enjoying my time trying to read a variety of styles within the genre.

Switcheroo is the eighteenth book in the Gideon Oliver series. It is not necessary to read the previous seventeen to enjoy this book. Elkins gives the reader everything we need to know to enjoy the story.

Gideon Oliver is a forensic anthropologist. Fans of the genre or of television mysteries might think this is sounding very similar to Kathy Reichs’ “Temperance Brennan/Bones” series, and they’d be right. But the first Gideon Oliver book was published a decade and a half before Reichs’ series.

Oliver is called to the Channel Islands to assist with a cold case from the 1960’s. But as Gideon investigates, he discovers that the roots of the case go back to World War II when the wealthy Roddy Carlisle and the middle-class George Skinner were ‘swapped’, as children, during the Nazi occupation.
What I find most interesting about this book is the low-key nature of Gideon Oliver. Clearly very bright and more than competent, Oliver works methodically and steadfastly to solve the mystery. It is natural, I suppose that when working on a cold case from four decades earlier (or more), it is difficult to raise the stakes to suggest an urgent need to solve the crime.  Although there is some effort to suggest that more murders may happen if the case isn’t resolved, this never quite feels to be the case.

However, Oliver’s process is still satisfying and I felt that I was completely understanding of the science involved (no small feat to have me understand the science!).

The story is surprisingly complex, for what, on the surface, appears to be a straightforward, simple plot (that crosses through a couple of generations).  I liked this very much and would be very interested in reading more Gideon Oliver stories and more works by Aaron Elkins.