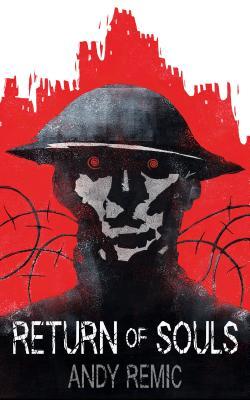 I was not aware that this was book two in a series/trilogy until I sat down to write this review and grabbed an URL for the cover to paste above.

Return of Souls, by Andy Remic, is a novella of war and its atrocities that transcends time and dimensions.

Private Jones is a soldier in the trenches in the War to End All Wars (WWI).  By so many accounts, it was one of the most brutal wars for soldiers and Remic captures this well through the journal writings of Private Jones as he details the horrors that he’s witnessed and the fears that plague him.  But as the story moves on, Jones’ fears begin sounding a little stranger and stranger and we can’t help but wonder if its psychological stress or if something else is actually happening.

But this is an Andy Remic story, and if you are at all familiar with him you probably already guessed that the story would take on a tangent away from a conventional war story.

Private Jones wakes up in a strange land where is found and tended to b a woman named Morena.  She tells him of the atrocities on her world and of the battles that have played out.  Her role as nurse contributes to his falling  in love with her and he promises to help and protect her even in the face of unknown evil.

This is a very powerful piece and I’m really curious to go and read the first part of this story since this feels like a very good beginning to me.  There are a lot of unknowns, but Remic builds the story nicely and I trust that he will answer the unknowns as we go (and he does).

I’m not a fan of stories that don’t have endings but instead rely on trying to secure another sale by not ending the current story, and for that I take away a ‘star,’ but otherwise this was a very compelling read that had me eager to turn the page to see where it was going.

Looking for a good book?  Return of Souls is a novella by Andy Remic that takes on the horrors of war from different times and different realities through the eyes of a front lines private.