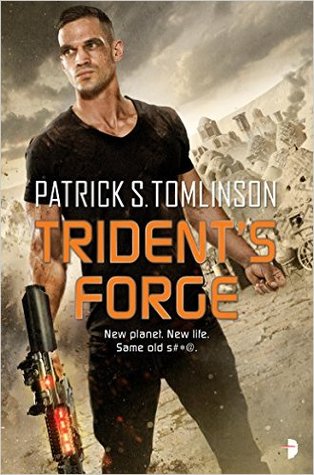 The last humans from a dead planet Earth have been traveling through space for centuries on an ‘ark’ but now they’ve finally arrived at their destination – Tau Ceti.  A planet that can support human life.  But it also supports the life forms indigenous to the planet and despite trying to live out of sight of the native life it comes as more than a little surprise when one of the natives, Kexx, can speak to them in their own language.  Thanks to the implants in the humans, they are able to connect to their ship’s computer and get an instant translation from those who can’t speak the human language.  Except … the computer would have had to have learned the native language somehow….

Bryan Benson, once a popular sports figure on board the Ark, then the Ark’s detective who saved the entire human race, has been in retirement since arriving at Tau Ceti but his services are requested, to work with Kexx and uncover what’s happening on the planet.  Shortly after arriving, the village is attacked and there are great losses on both sides.  Benson almost instantly becomes legend among the natives for his battle skills.

But nothing about this feels ‘right.’  With Kexx as guide to the way the world (Tau Ceti) works, Benson suspects that there is something going on that has less to do with the locals than it does the humans.  The human presence is akin to the serpent in the garden of Eden.  And the deeper Benson, and his wife (the chief constable of the human’s) probe into this, the worse it looks for the last members of mankind.

This is the second book in the Children of a Dead Earth series, and while it’s always best to have read a series from the beginning to pick up on some of the detail, I truly believe that this book could be read as a stand-alone novel.  But even if you read this first, you will want to go back and read the first book!

This book is pretty significantly different from book one.  Just the setting alone changes things.  The action of Book One (The Ark),  took place completely on the Ark.  This book primarily takes place on a planet, with some action occurring on the ship.  But ‘action’ is the operative word here.  This book is full of action with one heroic moment after another and Bryan Benson coming out of it like the action hero he is clearly set up to be.

What author Tomlinson has done particularly well here is his ‘alien building.’  He gives us a new set of intelligent life unlike anything we’ve seen before.  Primitive but capable of abstract thought that allows them to understand some of what Benson and the humans explain to them.

And with the aliens, we get a unique view of mankind.  And to show the wisdom potential of this alien race, we have Kexx reflecting:

And what industry would the humans not immediately come to dominate? Kuul and Tuko were worried about their guns, but Kexx was coming to think the real danger the humans posed was more subtle and wider-reaching than something as blunt as a new weapon.

The mystery that Tomlinson sets up is quite interesting, though breaking it hinges almost solely on one bit of over-sight from an otherwise pretty careful contingent of criminals.  The action is nearly non-stop and Bryan Benson is a perfect action hero, throwing himself into battle with reckless abandon and partly through skill and partly through dumb luck, comes out on top time and again.  I found I was breathless during some of the more intense action scenes and I was often eager to read on to the next page.

Tomlinson manages to incorporate some aspects of voyagers being on a new world that I don’t remember reading before, but would appear to make a lot of sense.  The notion of gravity for one.   While the Ark had an artificial gravity, a planet is going to have something quite different than what was on a ship.

But also…space (or distance).  This moment touched me and helped lend an authentic air to the story:

It was closer to midday by the time the caravan pulled out of the village’s northern gate and pointed down the laser-straight road toward the horizon. Benson’s eyes actually had trouble looking down it. Maybe not his eyes so much as his sense of depth. He’d spent the first thirty-five years of his life inside an artificial habitat only two kilometers long and two kilometers in diameter. Avalon and its twin module Shangri-La were, without a doubt, the largest enclosed spaces ever built by mankind, but they were still miniscule compared to an actual planet. He’d had enough trouble upon landing dealing with an infinite sky, especially after his incident in the EVA pod, but somehow the straight line of the road reaching all the way out to the horizon helped define the distance, fixing it in his mind. The longest street back in Shambhala was less than three kilometers, and he’d watched it built incrementally over the span of three years.

This Atlantian road, by contrast, was many dozens of kilometers long. Some part of his stunted visual cortex told him it was impossible. Benson actually felt a pang of vertigo when he looked down it for too long. Instead, he spent quite a bit of time looking at his shuffling feet.

I would be surprised if there are only two books in the series, so I am quite curious to see where it goes from here, but wherever it is, I hope that I can come along for the ride.

Looking for a good book?  Trident’s Forge, by Patrick S. Tomlinson is a wild space opera story, full of mystery and plenty of action and makes for an entertaining read.

series: Children of a Dead Earth #2