THE ARROWS OF TIME – Greg Egan 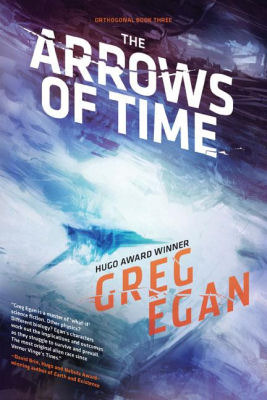 Well…I’m nothing if not consistent.  I have once again requested a book for review that is part of a series, but not the first book in the series.  this is, in fact, the third book in Greg Egan’s “Orthogonal” series.  This also happens to be my introduction to the work of Greg Egan – someone whose name I am familiar with, having seen it many places, including in lists of Hugo winners.

There are two things about this book that immediately put it in the ‘not my cup of tea’ category.  First is the aforementioned being the third in a series.  Were I in a bookstore, I would rarely pick up a book that was late in a series unless there was something about it that implied that the series was not one long story arc (such as the Conan books or Star Trek books, etc).

In this book, we are in an alien universe in which the principles of physics are very different from those in our known universe.  Time, a valid fourth dimension, operates differently.  For inter-stellar travelers, the voyage is longer for the travelers than it is for those left behind.  And presently a voyage is in its sixth generation of personnel with the travelers having developed advanced technology and are now ready to bring that technology back to their people who desperately need it to save their planet.  But six generations is a long time.  Those aboard the ship no longer feel as though they belong to the same race as those back on a planet they never knew.  And thus the conflict among those who desire to continue the mission as planned and those who want to move on.

The story is interesting, especially given the very different physics in this universe, and I wouldn’t mind trying this series from the beginning.  However, I found Egan’s science writing a tad on the boring side.  Perhaps if I was a scientist (a physicist in particular), I would perhaps enjoy this more, but Egan spends more than a little time describing the science in his new universe, complete with charts.  Nothing takes me out of a story like a science lesson!

This is the sort of book that I imagine college physics professors reading and then discussing/debating at a local science fiction convention.  ANd sadly, that’s just never been my thing.

I’ll rate this two and a half stars based on the premise and an interesting idea that is over-run by the author’s trying to show his cleverness by teaching science instead of just telling a good story.

Looking for a good book?  The Arrows of Time, by Greg Egan, is a hard science fiction story, the third in a series, with an interesting premise but is slowed down by the science.

The Arrows of Time